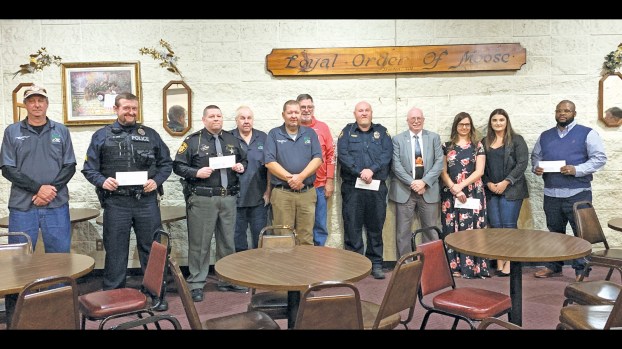 Members of the Loyal Order of the Moose Lodge 701 made donations to dozens of community groups on Wednesday, with funds coming from 25 percent of their gaming money. (The Ironton Tribune | Heath Harrison)

Local schools, community groups and others received donations this week in advance of the holiday season.

The Loyal Order of the Moose Lodge 701, based in Ironton, distributed checks on Wednesday to dozens of recipients, eight of whom were on hand to collect the checks in person.

“We’ve been doing this since about 2005 or 2006,” Jerry Walker, the administrator for the Moose, said. “It’s 25 percent of our gaming money every year. We take a lump sum and give it out. We’ve been doing it ever since the state of Ohio took over gaming.

Each year, in the week before Thanksgiving, Bill Neville takes his flag and goes for a walk across the Oakley... read more