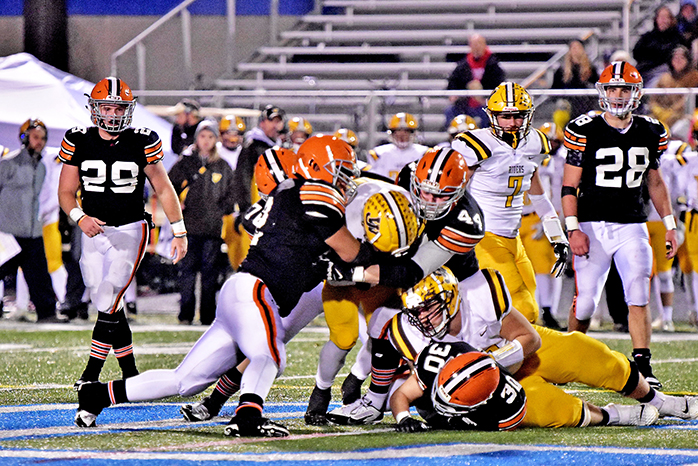 KIRTLAND — In eight of the past nine years, the Kirtland Hornets’ season has been like a broken record, playing the same song over and over.
It’s the kind of song that 14-year head coach Tiger LaVerde likes hearing.
Kirtland’s 28-14 win over Oak Harbor last Saturday, it vaulted them into the Division 5 state championship game, their eighth title game in the last nine seasons.
LaVerde said playing a tough junior varsity schedule that includes teams like St. Edward, Avon, St. Ignatius and Massillon have helped prepare the younger players for the varsity.
A case in point is this year’s team which is 14-0 and facing the Ironton Fighting Tigers’ (13-1) in the Division 5 state championship game at 8 p.m. Saturday at Canton’s Hall of Fame Stadium.
Kirtland won the Division 6 state title last season, the fourth championship under LaVerde who has a 173-17 career record. However, this team is nothing like last year.
“We’re not very big. Last year we were huge. We had a couple of 300-pound tackles. We were 240, 240, 240 in the middle. We did it knocking people around. But we graduated nine guys on offense and nine guys on defense. This is a whole new team,” said LaVerde.
“They’re little and they’ve met every challenge so far. I didn’t know how this year was going to go, but these little guys have worked their tails off and they use their quickness well and their leverage.”
Ironton has size and strength with good skilled players that have LaVerde uncertain what to expect. He said no one on their schedule has the qualities that Ironton brings to the table, but he did think they were similar to one team that’s very familiar to him.
“I think they are very similar to us. They play great defense and they run the football. What they want to do is kind of the same thing we want to do,” said LaVerde.
“We played a couple of wing-T teams, but (Ironton) really isn’t a wing-T team. There’s really not anybody we’ve played that lined up like they do. They just kind of run at you. Everybody runs the spread. For us to match up with Ironton is pretty cool because we’re kind of one of the teams that’s gone against the grain.”
The Hornets’ junior quarterback Liam Powers (5-10, 180) is 34-of-58 for 721 yards and eight touchdowns on the season. He has thrown just one interception. However, last week he threw only three passes.
Senior running back Luke Gardner (5-9, 175) and junior Mason Sullivan (6-0, 195) do the bulk of the ground work. Sullivan has 216 carries for 1,798 yards and 30 touchdowns while Gardner had 1,535 yards on 137 attempts with 23 TDs.
The leading receiver is junior Gage Sullivan (5-11, 185) with 14 catches for 273 yards and a score.
Ironton counters with junior running back Reid Carrico (6-3, 225) who has 179 carries for 1,545 yards and 25 touchdowns. He has also caught 17 passes for 372 yards and four scores.
Senior quarterback Gage Salyers (6-1, 205) is 70-of-1142 passing for 1,398 yards and 12 touchdowns and five interceptions. He has 100 carries for 718 yards and 13 TDs.
The receiving corps has junior Trent Hacker with nine catches for 219 yards and three TDs, junior Kyle Howell 13 receptions for 188 yards and two scores, senior Jordan Grizzle has nine grabs for 178 yards and two TDs, senior Collin Freeman six receptions for 139 yards and a touchdown and sophomore tight end Ashton Duncan 10 grabs for 134 yards.
Kirtland gave up only 34 points in the regular season, but the defense allowed 31 points in their first two playoff games before beating Akron Manchester 32-7 in the regional finals and previously unbeaten Oak Harbor 28-14 in the state semifinals on Saturday.
Ironton’s defense has allowed 1,477 yards on 439 attempts and teams are 80-of-192 passing for 1,047 yards and 16 interceptions, five by Salyers. The Fighting Tigers have given up 104 points overall, 56 during the regular season.
LaVerde said Ironton’s defense is hard to attack.
“Usually in D5, you can find a couple of weak spots. They don’t have anyone we can say we’re going after that guy. They’ve got 11 guys who can play. They run to the ball well. They’ve got big, strong kids at every position. We’re really going to have to execute well,” said LaVerde.