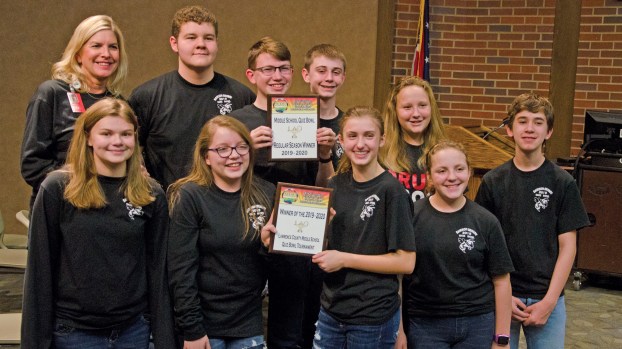 Ironton was the runner up of the 2019 Lawrence County Middle School Quiz Bowl Tournament at Ohio University Southern on Friday. The team was also second placed in school-to-school matches for the year. (The Ironton Tribune | Heath Harrison)

Dawson-Bryant’s team was the regular season winners of school-to-school matches throughout the year, going into the event undefeated.

However, they lost early on to Ironton in the double elimination tournament.

Working their way through the losers brackets, they defeated Fairland to face Ironton again.

In their rematch, Ironton initially led through the first rounds of questions, followed by the alphabet round, but in the last section, the lightning round, Dawson-Bryant pulled ahead, meaning the teams had to go to another match.

Answering questions in subjects including history, math, literature and geography, the two schools appeared to be locked in a dead heat after the first round of their final match, with a score of 14 each. But, as the match progressed, Dawson-Bryant built up a lead, with the score standing at 47-43 before the final lightning round.

Once that questioning was complete, Dawson-Bryant won the tournament over Ironton, 55-48.

Waginger, who won an outstanding coach award from the Lawrence County ESC, who organized the tournament, said it was the first time they had won the event in five years.

“We’ve won the tournament before,” she said. “But we’ve never won the regular season. What a great team.”

Rick Roach, the school’s principal said he was proud of the group.

“To begin with, just to go the regular season undefeated, that’s never been done before, as far as I know, at this school,” he said. “The nerves were evident earlier when they lost to Ironton, but it showed resilience to make it through the bracket and get back-to-back wins.”

Roach said Waginger has done great work as a coach for several years. And the school had another honor this week, with one member of the team, Wood, also being runner up in the county spelling bee on Wednesday.

“Hopefully, it’s a sign of more great to things to come for Dawson-Bryant,” Roach said.

The ESC will host the high school Quiz Bowl tournament, the Ironmaster, in January.