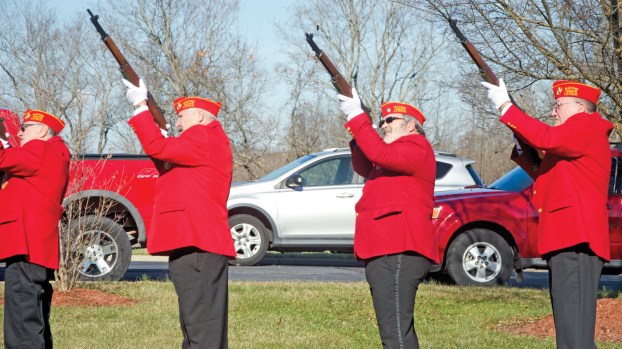 GREENUP COUNTY, Ky. — On Saturday, a crowd gathered at the Kentucky Veterans Cemetery Northeast to mark the 78th anniversary of the event that drew the United States into World War II.

A Pearl Harbor commemoration took place at the cemetery on the Industrial Parkway, an annual, solemn remembrance that began there in 2016.

“At 7:55 a.m., 78 years ago, the Japanese attacked Pearl Harbor with bombs and torpedoes,” Cheryl Wooten-Spriggs, regent for the Poage Chapter of the Daughters of the American Revolution in Ashland, said. “We can’t imagine that morning. The chaos killed thousands of Americans, but it served to unite the people of the United States like never before. It was said that they had ‘awakened a sleeping giant.’ We’re here to remember those who died at Pearl Harbor that morning.”

After the strike was over 2,403 American soldiers and 1,143 were wounded and 21 ships of the U.S. Pacific fleet were lost or damaged.

The next day, President Franklin D. Roosevelt addressed Congress, referring to Dec. 7, 1941 as  “a date which will live in infamy.”

The president asked for and was granted a declaration of war against Japan. In response, Japan’s fellow Axis power, Germany and Italy, declared war on the United States, bringing the country into the full war, which would last four years in Europe and the Pacific.

“We are gathered here to commemorate Pearl Harbor, and to honor those who died and those who lived to fight another day,” Rita Cater said in her opening prayer. “Because of their dedication and the continued dedication of the American military, we continue to enjoy our God-given rights.”

The ceremony featured a presentation of colors from the West Carter High JROTC, of Olive Hill, who also conducted the missing man ceremony.

The cadets marched around a table, set for five and placed hats for all branches of the armed services.

As they explained, a single candle represented loved ones kept apart, a lemons stood for the bitter faith of those left behind, inverted glasses were for those unable to toast and empty chairs were for those no longer here.

Members of the Marine Corps League Greenbo Detachment then walked in procession to a table, where they laid roses for each ship sunk in the attack, as the name and number of casualties were read out. This was followed by a 21-gun salute.

The ceremony ended with the playing of “Taps” by David Keeton, a junior at Paul Blazer High School in Ashland, then the retirement of colors.

This is the fourth Pearl Harbor remembrance at the cemetery, which opened in 2010 on the Industrial Parkway.

Delores Sarpas, of Olive Hill, was inquiring locally on the 75th anniversary of the attack to see if a local ceremony was planned. When she found out that this was not the case, she began organizing.

Sarpas, who was only seven years old when Pearl Harbor occurred, said she wanted to be sure the attack was not forgotten. She has organized the event each year since, with strong attendance. In 2017, she was joined by Proctor Davis, a survivor of the attack who lives in Greenup.

Sarpas said Saturday would be her last year in charge.

“I want to thank all of you who have been with me for these years, there’s so many,” she said. “I’m so proud of you all.”

She thanked the groups involved and paid tribute to Col. Ralph Newman, who keynoted the inaugural event and had helped her with organizing. Newman, who lived in Grayson, died in April at age 78.

“If you knew him like I did, you lost a friend,” Sarpas said.

She said the event would continue, with local groups taking over.

“This may be my last year,” Sarpas said, saying she would be present next year in spirit, if she can not make the trip. “But the Marine Corps will be here next year. I’m very proud that you guys will be taking it over.”

“Delores came to me six to eight months ago to see if we would help and get involved,” Jerry Yates, senior representative for the union, who hosted the after event reception in their nearby hall, said. “We jumped on the chance to help with something like today.”

“Delores is a great gal,” she said of her fellow member, who brought the group into the event. “She started this on her own. She’s a patriot and has a lot of military in her family and has been committed to veterans.”

Spriggs said events like this were important to honor and educate.

“So many people take things for granted and we wouldn’t have freedom without the people who stood up and fought,” she said.

CANTON — It was the final game of the 2019 season, but it wasn’t the way the Ironton Fighting Tigers... read more