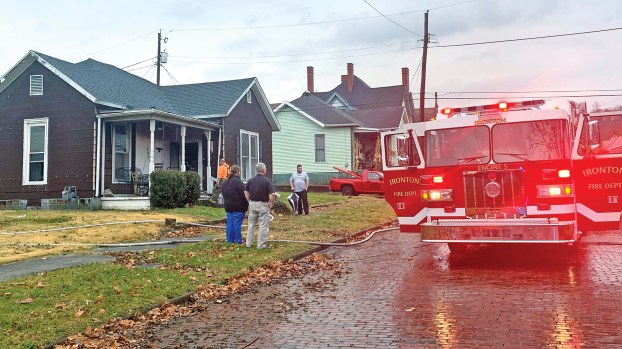 A fire, suspected to have started in the kitchen area of this home at 407 Chestnut Street in Ironton, left a woman homeless on Monday afternoon. (The Ironton Tribune | Heath Harrison)

A woman was left homeless after a Monday afternoon fire.

When they arrived on scene, they found a fire in the back of the small brown house.

Mahlmeister said the woman was cooking at the time the fire started and the inspector was trying to determine if that was a factor in the fire.

“She was cooking, went into the other room, came back and there was the fire,” he said.

He said the firefighters were able to put out the fire quickly.

“They were able to get in there and get a quick know down and then it was just hitting the hot spot and tearing down the ceiling where the fire had breached it,” Mahlmeister said.

Gas and electric was turned off to the house as a precaution as the house was rendered uninhabitable by the fire damage.

“There was damage in the ceiling in the kitchen and the dining room area, so the electric was compromised,” Mahlmeister said. “We want to make sure we don’t have anything rekindle because of the electric.”

This is the fourth house fire in Ironton since Thanksgiving.

Remembering those who have passed: Hall Funeral Home to have remembrance service

PROCTORVILLE — Hall Funeral Home will have its 20th annual tradition of remembering those who have passed away this year... read more