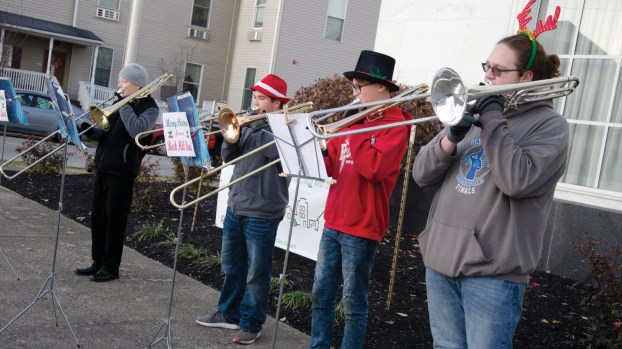 “It gets you in the mood for the Christmas season, doesn’t it?” Carson Hunt, the minister for First Presbyterian Church of Ironton said of the mood on the Lawrence County Museum’s historic church walk on Saturday.

Visitors to his church were first treated to two songs on the flute from his wife, Christine, then they all joined in to sing “Joy to the World.”

The church was one of seven on the route downtown, giving participants a tour of the city’s historic places of worship.

Along the route, groups of students from the Rock Hill High School band played Christmas songs, greeting the walkers.

“It gives it a little extra flavor,” Herb Brown, who was guiding the walk by flashlight, said.

At each stop, information was given about the history of the denomination, as well as the buildings, many of which date back to the 1800s.

Hunt said it was good to see people out and about, taking in the churches.

“We get more people then any night of the year,” he said. “What I get is a lot of smiles and happiness. And people can see that we’re still alive and preaching.”