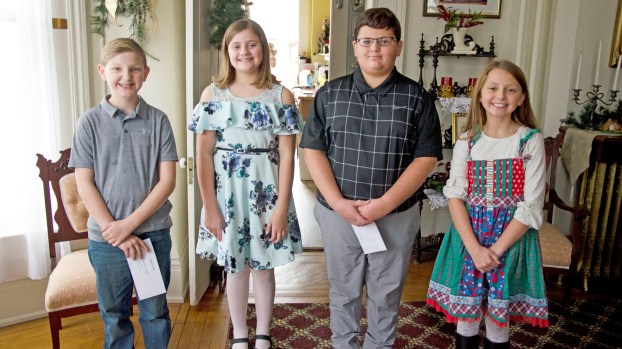 Winners were announced at a reception on Sunday for the annual history essay contest at the Lawrence County Museum.

The writing competition is open to all fourth graders in the county and the schools send their top five essays to the museum to be judged, Kay Rader, a trustee at the museum, said.

Taking the top prize was Josiah Stallard, from Lori Deer’s class at Dawson-Bryant Elementary. His essay was about the history of the Macedonia Church.

In second was Siera Johnson, of Kris Wilson’s class at Ironton Elementary. She wrote about the jailbreak of 1966.

Two students tied for third place. Marley Perry, of Tara Schneider’s class at Symmes Valley Elementary, who wrote about the case of the Massie Murders, and Peyton Ford, of Mary Beth Weber’s class at St. Lawrence Elementary, chose the history of Ironton professional football as his topic.

Rader said the museum has been hosting the contest for about 10 years.

The Ironton Tribune will run each of the four winning student essays as a weekend feature throughout the next month.

Ohio updates list of in-demand jobs and makes it searchable

COLUMBUS (AP) — Ohio rolled out an updated list of jobs that are in high demand — and made it... read more