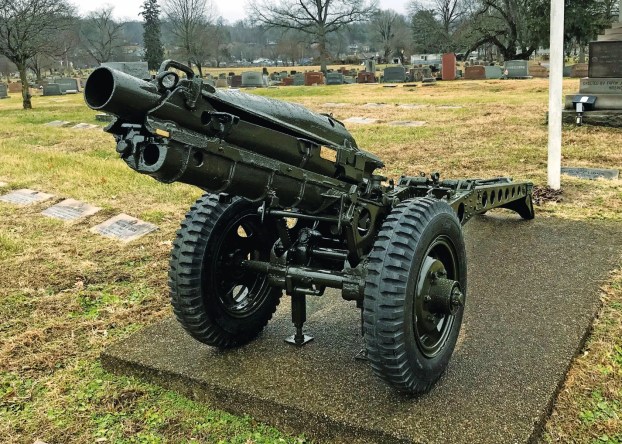 The refurbished World War II-era artillery cannon at the Woodland Cemetery in Ironton on Friday It was fixed up by the Ramtech class at Collins Career Technical Center . (Submitted Photo)

For about as long as anyone can remember, a World War II-era cannon has stood on Veterans Hill in Woodland Cemetery in Ironton.

At some point, the 75-mm artillery cannon was painted a color that had faded down to an orange color. Time had also flattened the tires and mold was beginning to take over the old piece of military gear.

“When I was up here for events, it just wasn’t up to standard,” he said. “It just looked horrible, both tires were flat, it actually had mold growing all over it.”

So, he went to the Lawrence County Commissioners and asked if he could take over responsibility for the upkeep of the cannon and get it refurbished.

They agreed, so Carpenter got Collins Career Technical Center’s RAMTEC class to agree to build and weld some jack stands on the cannon so the tires didn’t flatten out again. Then the students got interested in what was going to be done with the cannon.

“They asked what I what I was going to do with it. I told them I needed it completely stripped and repainted,” Carpenter said. “They said they could do that too. The teacher, Johnny Cyrus, him and his kids did an amazing job on this cannon. It is in better condition now than some of the military museum pieces I’ve seen. It looks like it rolled off the factory floor.”

The hand-painted red color is gone and the cannon has proper military tires replacing some agricultural ones.

Carpenter said the cannon was manufactured in 1943, but if it was used in a military conflict, it was probably in the Korean War. Even after doing some research and talking to anyone who might possibly know, he couldn’t find out when it was placed in the cemetery or by what group.

“That is one of my issues, I couldn’t find any information or anyone who could say they even owned it,” he said.

On Friday, Carpenter was at the cemetery as the cannon was reinstalled ahead of Saturday’s Wreaths Across America event where all the veterans’ graves will have an evergreen wreath laid on it.

“I want this to be a point of pride,” he said. “I want people to come a look at it. This is the first step of a project to make this spot attractive again. This is just the first step, I have a long way to go.”

Today’s Wreath’s Across America event at the Woodland Cemetery marks a first for the local organization. For the first time... read more