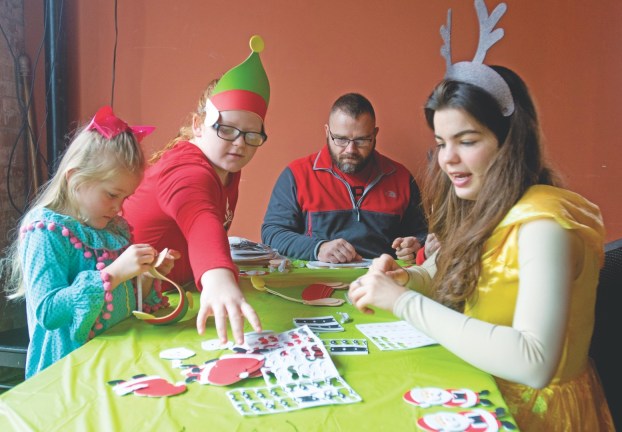 Kids and a dad build Christmas crafts with Disney Princess Belle during the Friends of Ironton’ annual Breakfast with Santa on Saturday. (The Ironton Tribune | Mark Shaffer)

Busy day at the Ro-Na

It was a day full of events at the Ro-Na Theater on Saturday.

The theater area was packed with vendors for the Christmas on Vernon event and the lounge area was packed for the Friends of Ironton’s annual Breakfast with Santa with kids and families there to see Santa and Mrs. Claus, have some pancakes, make crafts and even meet members of the semi-pro football team, the River City Buccaneers.

Later, there was lunch and Christmas in Ironton, a live music concert presented by Be Hope Church and Ironton aLive.

Valerie Freeman, an organizer with Friends of Ironton, said despite all the activities, it was going well.

“It’s been fantastic,” she said. “We’ve had a good turnout for the youths, for our city, for our community and for these local vendors to everyone who came out.”

Vernon on Market Street was supposed to take place on Vernon Street, next to the stores Treasures From The Valley and Cardinal Wishes which organized the vendor sales, but the December weather was cold and drizzly.

“So, we moved it inside the Ro-Na and the City Center,” Freeman said. “The cold we love, snow would have been perfect, but with the rain, it was better to move it inside.”

Families lined up to have their children’s pictures taken with Santa and Mrs. Claus and all the children assured Santa they had been good all year.

The kids then could make crafts with Ironton High School students dressed up as Disney princesses and the Grinch was wandering around, although even he seemed to be okay with the Christmas festivities.

“They are volunteers, they are with the majorettes and the drama department,” Freeman said. “They are very popular with the kids.”

Also in attendance were members of the River City Buccaneers.

Adam Stefanic, quarterback and part-owner of the Buccaneers, said they were out to be a part of the community.

“We’re just trying to get our name out there a little more,” he said, adding this is the fourth year the team will be playing at Tanks Stadium in Ironton. “We’re trying to do more for the community and we are here for the kids and to get some fans in the stands.”

The proceeds from the Ro-Na events are used by the Friends of Ironton to continue the renovation of the former movie theater.