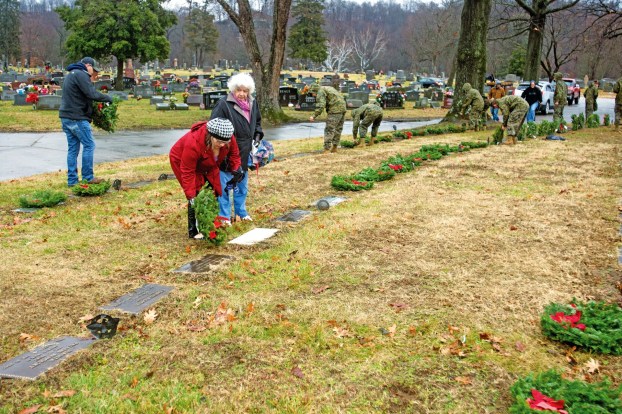 People put wreaths on the graves of veterans in Woodland Cemetery on Saturday as part of the 2019 Wreaths Across America event. (The Ironton Tribune | Mark Shaffer)

Remembering fallen during the holidays: Group places evergreen wreaths on every veteran’s grave

It was cold and wet on Saturday, but that didn’t stop a couple hundred of people from coming out to honor Lawrence County’s fallen veterans at the annual Wreaths Across America event at Woodland Cemetery in Ironton.

The event was started six years ago by Linda Dalton and Juanita Southers after they saw the Wreaths Across America event in Arlington National Cemetery in Washington, D.C., where a live evergreen wreath was placed on the grave of every veteran.

They were so touched and inspired, they came back and decided they wanted to do the same here in Lawrence County. So they contacted the national group and became the local coordinators of the event, which takes place in mid-December before Christmas.

Saturday was bittersweet as the group finally achieved Southers’ goal of getting a wreath for all 1,100 graves in Woodland Cemetery. It was a last request of Southers, who passed away in July.

She was not forgotten.

The crowd applauded as Laura Brown and Sally Ingles, who took over coordinating the event, presented Dalton and Southers’ daughter, Carla, with acrylic engraved awards to recognize their service to the community.

The assembled crowd of citizens and members of the Greenup County ROTC opened the boxes of wreaths and placed them across the graves on Soldiers Hill.

“We have lots of people and we really appreciate this,” she said. “There was a group of people who organized this and it was a team effort.”

She said she hopes next year is just as nice.

“I just hope Juanita is enjoying this,” Brown said.

Carla Southers said she thinks her mother would have loved seeing so many people out and that this was the first year the group got wreaths for every veteran’s grave.

“That was always her goal,” she said. “When they started out, they put a wreath between every two or three graves and then they got to where they could have them between every other grave and that was beautiful. But she would be thrilled that there are enough wreaths and enough support to cover the entire veterans’ cemetery. I think that this is a wonderful memorial for her and I appreciate everyone’s effort.”

Woman sentenced to 23 years: Adkins won’t go before parole board before 2041

On Monday afternoon, a woman who admitted to shooting her ex-husband in a South Point McDonald’s parking lot was sentenced... read more