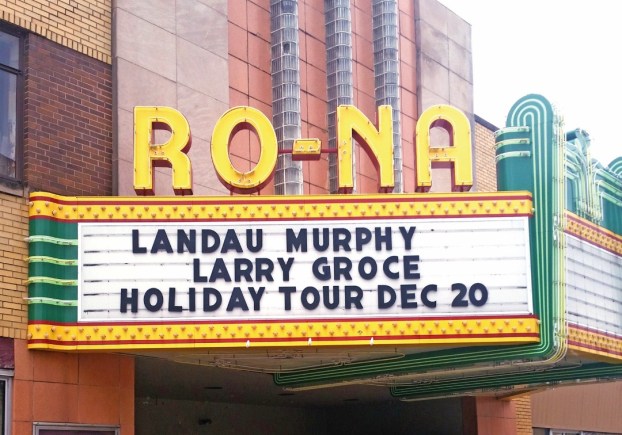 Two of West Virginia’s most famous musicians, Landau Eugene Murphy Jr. and Larry Groce, will bring their Christmas show, “Landau and Larry’s Home for the Holidays Tour” to Ironton’s Ro-Na Theater on Friday.

Murphy, who was working at a car wash in West Virginia, gained fame for his swing-style vocals on songs like “I’ve Got You Under My Skin” and “My Way,” which helped him win the sixth season of America’s Got Talent in 2011. His album, “That’s Life,” debuted at number one on the Billboard Jazz chart. His fourth album “Live In Las Vegas at Caesars Palace” is slated for release in 2020.

Groce became famous in 1976 when his song, “Junk Food Junkie,” spent 15 weeks on the charts and reached the number nine spot on the Billboard Hot 100. He has appeared on nine Disney albums, including a couple of Christmas albums. In 1983, he began the musical radio show, Mountain Stage on West Virginia Public Radio and is broadcast nationally on NPR. Over the past 36 years, Mountain Stage has featured hundreds of artists including R.E.M., Ralph Stanley and Tyler Childers.

Groce said he and Murphy decided to tour together after Murphy’s manager, Burt Allen, called him out of the blue last spring and asked him to do a Christmas tour together.

Groce told him he wasn’t sure because he doesn’t tour much anymore.

Groce asked his wife, Sandra, a viola player with the symphony, if she was free to play some shows because he didn’t want to tour by himself. She passed because the symphony had shows at the same time.

But the answer was in his own household.

“My daughter, Virginia, who plays the viola like my wife, said ‘I’d like to do it, Dad.’ So, I thought that was a big opportunity I may not get again,” Groce said.

So he called Allen back and agreed to tour. For the rest of his band, he got Michael Lipton and Ted Harrison from the Carpenter Ants to perform.

The show is about an hour and half long. Murphy sings for the first half hour, Groce sings next and then they perform together for the finale.

Groce said he sings some familiar songs “like “Frosty the Snowman,” which a lot of people don’t realize was written by a West Virginian, Walter Rollins, so I had to include that,” Groce said. “And I recorded that for Walt Disney Records.”

He will also do original songs such as  “Christmas Angel” and will close with “Junk Food Junkie.”

He and Murphy will sing “The Christmas Song,” “I’ll Be Home for Christmas,” “White Christmas” and “Silent Night.” Groce said that although Murphy sings in a jazz style and his style is more of a “folk pop,” when they sing together in more of the style of Frank Sinatra and Dean Martin.

“Which I like, I’ve just never performed it much,” he said.

Groce said Allen is the one who picked the tour spots, including the Ro-Na Theater. Although it is a smaller venue than his weekly Mountain Stage hosting gig at the Cultural Center in Charleston, West Virginia, he doesn’t mind.

“Small, big, we don’t care,” Groce said. “I don’t care about the size, I just want to have people who want to enjoy some Christmas music and let us have a good time. Which we have been doing and I think the crowds have too.”

The show will be at 7 p.m. Tickets for the show are $20 and family discounts and VIP tables are available. For more information, visit https://www.brownpapertickets.com/event/4449636.

The show is also a food drive. There will be barrels outside the Ro-Na Theater for residents to make donations of non-perishable food items that will go to River Cities Harvest. Concertgoers who donate will get a free Christmas CD autographed by Groce and Murphy.

Remembering fallen during the holidays: Group places evergreen wreaths on every veteran’s grave

It was cold and wet on Saturday, but that didn’t stop a couple hundred of people from coming out to... read more