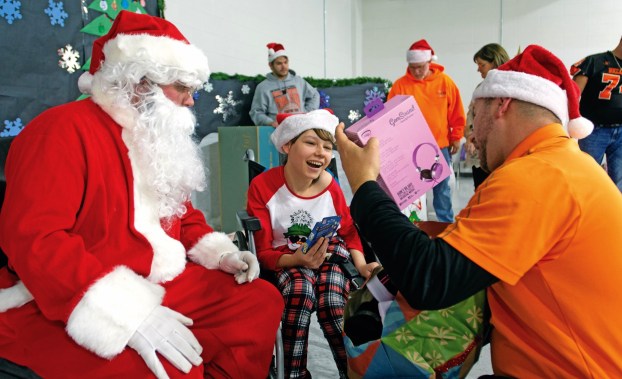 McKenzie Lincoln is thrilled as Michael Payne, the owner of the River City Buccaneers shows her the headphones she got from Santa Claus on Thursday at the Open Door Christmas party. (The Tribune | Mark Shaffer)

COAL GROVE — On Thursday, excited cries of “It’s just what I wanted” echoed off the walls of the gymnasium of the Open Door School as the children opened up presents from Santa Claus.

It was the third year that the River City Buccaneers and members of the community donated their time and money to get presents for the Open Door School.

Michael Payne, the owner of the River City Buccaneers, said they have done this event for the past three years and he loves seeing the children’s faces light up when they get the present they requested, whether it was traditional gifts like a train set or a baby doll, or something more personal like a bean bag chair.

“Open Door holds a special place in my heart,” he said. “My grandfather, Robert Payne, volunteered here for 20 years. Grampa Bob, they called him.”

And Cindy Brown, the mother of his boss at Brown Landscape Management, Alex Brown, organized the effort to get all the playground equipment at the former site of the Open Door school in Ironton.

“So, we wanted to do it this year in her honor,” Payne said.

Teachers sent home a letter earlier in the month about the event and had a parent make a wish list of what the kids wanted. Then, the Buccaneers found people in the community took on the task of getting the kids the gifts they wanted.

“It’s awesome,” Payne said. “The community has been great this year. Forty people within 12 hours asked what they could do to help. They were given a child to sponsor and bought the gifts. We just made it happen for the sponsors. And seeing their smiles, that is what it is all about.”

A very popular sight for the kids was Peppa Pig, Spider-Man and Princess Belle. Kids hugged on them while waiting for their turn to get their presents.

Open Door principal Kendra Heim said that it was a great event.

“It’s wonderful,” she said. “It is just phenomenal. The kids love it and the community really rallied behind them. It shows their love for our kids.”

Payne said that it was bittersweet this year, because of the DD funding levy that failed during the election in November.

“With this levy not passing, unfortunately, people didn’t know what it was for. They just saw an added fee,” he said. “We wanted to show them that these kids are awesome and they definitely need our help.”

CMO gives to over 400 families

CHESAPEAKE — “We’re shooting for about 450,” Danny Newman, with Chesapeake Community Mission Outreach, said on Thursday. He was referring... read more