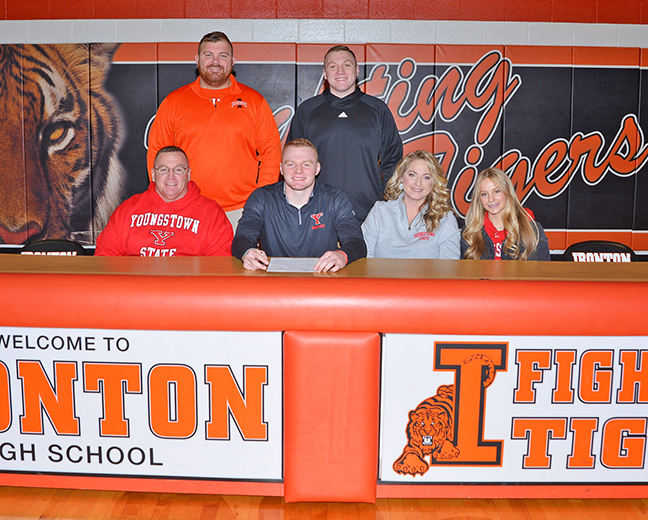 For Gage Salyers, it was a matter of tradition meets tradition.
Salyers is a senior for the tradition-rich Ironton Fighting Tigers and he signed a letter-of-intent with the Youngstown State Penguins, another football program filled with tradition.
“It’s an honor to be on such a rich program. Jim Tressel is the president (of the university). He loves football. And they’ve got (current head coach) Bo Pelini. He’s been everywhere. LSU, Nebraska.,” said Salyers.
“We play some big teams, too. We’ve got Akron the first game (next season) and going into my sophomore year we play at my coach’s alma mater Michigan State. My junior year we play at (Kentucky). We’re like the SEC of the FCS. We’ve got North Dakota State in there and Illinois State. It’s going to be great competition.”
The list of potential landing sports for Salyers read like a who’s who. Among those who talked with him were Pittsburgh, Kentucky, Eastern Michigan, Michigan, Ohio State, Ohio, Toledo, Eastern Kentucky and Miami, Ohio.
“I’ve been talking to them a lot about playing defensive back. Coach Pelini is a defensive guru. He played defensive back at Ohio State. He was the defensive coordinator for LSU when they won the national championship. They guy knows everything about defense, so I think it gives me a great opportunity to play at the next level possibly. He’ll teach me more as a person. He’s a great guy and a great coach,” said Salyers.
While having plenty of options to choose for his next stop, Salyers admitted it was a relief to end the recruiting process.
“It feels great. It feels like a great weight off my back. I have a good relationship with those coaches. I’m really excited to get up there,” said Salyers who was a Division 5 All-Ohio second team selection this past season.
For the season, Salyers completed 77-of-160 passes for 1,603 yards with 13 touchdowns and five interceptions. His 77-yard touchdown pass to Jordan Grizzle in the state championship game is now the longest scoring pass play in Division 5 championship game history.
As a runner, Salyers carried 112 times for 723 yards and 13 touchdowns as Ironton went 13-2 and finished as D5 state runners-up. Defensively, Salyers led the team with four interceptions.
Salyers was listed as an athlete and said he could play several positions depending on what the Penguins’ coaching staff determines is best suited for the team.
“They recruited me as an athlete, so quarterback or defensive back. I talk to the safeties’ coach a lot. Pickerington Central’s quarterback (Demeatric Crenshaw) committed there and he’s a really good quarterback, so I don’t know. We’ll just see where it falls,” said Salyers.
“I just want to get playing time to be honest. I’ll play guard if they want me to. Whatever will help the team win I’ll do.”
Ironton head coach Trevon Pendleton said Salyers will succeed regardless of what position he plays.
“He’s very smart. A lot of that is very instinctive and very athletic. If he makes the wrong step or the wrong read, he’s so athletic he makes up for it. Every time this year when a big play was needed, he was able to capitalize on it and ultimately made us a better football team,” said Pendleton.
“He’s kind of in a centerfield position. You have to be able to gauge the ball off someone’s hand and get a good jump on it. Playing quarterback helps him a lot. He understands route concepts and what people like to do. It allows him to jump routes,” said Pendleton.
“Filling the alleys he’s like a middle linebacker. He comes downhill and makes tackles. There are several times this year we look up and he’s making tackles at the line of scrimmage and to the naked eye people think we’re running a blitz and he’s just making a good read. I think he’s a guy who can make an immediate impact and get on the field early”
Not only will Salyers be at a program filled with a winning tradition, but it is a program filled with tradition in its coaches.
Former YSU football assistants and head coaches include Mark Snyder, Mark Stoops, Mark Dantonio, Bill Narduzzi, Mark Mangino, Gene DeFilippo along with current head coach Bo Pelini and Tressel who won four I-AA titles.
“A lot of our coaches played for Pelini at Nebraska. The safeties’ coach (D.J. Gomes) played three years in the league. We talk almost every week,” said Salyers who has thought about coaching as a possible career.
“I could see myself being a graduate assistant. I love being around the game. Youngstown State is a rich place for high profile college coaches,” said Salyers.
And with all that tradition, Salyers will fit right in.

Burton selects UIndy as best college option for her career