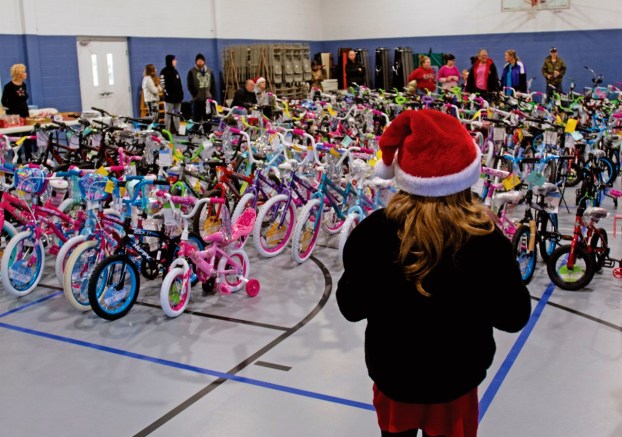 A girl looks over a sea of bikes to be given away on Saturday at John Dickess and Don Swartz’s annual bike giveaway at Central Christian Church in Ironton. (The Tribune | Mark Shaffer)

Rolling into the holidays: Community provides 165 bikes for annual giveaway

On Saturday, the fellowship hall of the Central Christian Church was filled with anxious children.

“When do we get our bikes,” they asked, as they looked over a sea of brand-new shiny bikes.

They had to wait a bit, they were told.

First, they got to file past tables of stuffed animals, dolls and toy cars to pick one out. Then they got to go through a second time because so many toys had been donated.

One girl, Harmony Bond, of Wheelersburg, had two stuffed teddy bears. She was only planning on keeping one.

“One is for me, one is for my uncle, Eddie, because he is in the hospital,” she explained. “I didn’t want him to be alone.”

While they were doing that, organizers John Dickess, owner of Dickess Auto Repair, and Don Schwartz, manager of Advance Auto Parts in Ironton, were making sure every child in attendance was signed up and solving other little problems.

Before it was time to start the handing out of bikes, Schwartz spoke to the crowd.

“I want you all to know this is from the heart,” he said. “This is what the community can do when we all come together. Now, who wants a bike?”

And all the children happily screamed, “Me!”

And as the kids got their bikes, they took them out a side door, which had a slight downward incline that kids used to launch their bikes out to the parking lot.

Schwartz said the bike giveaway started a decade ago at Advance Auto Parts. They had a girl’s bike and a boy’s bike to give away. People dropped their names in an entry box for a chance to win the bike.

“John looked in the entry box and said ‘You need more bikes,’” Schwartz recalled. “I told him I couldn’t ask my employees to donate any more money. So, he brought over two more bikes. Well, then a customer said he’d chip in ten bucks for that.”

The idea caught on and they ended up giving away 64 bikes that year and the demand kept going up. So the pair started asking the community to donate.

“We never thought it would get this big,” Schwartz said.

“We had years when we gave away 500 bikes at one time,” Dickess said. “The community pitches in for this. Every year, they just come out and start handing us money and checks. They want us to do this, but we couldn’t do this ourselves. The community is the one that puts this on.”

“It is one hundred percent community involvement,” Schwartz said.

And it is a lot of work to put it on. A list of kids and their bike preference is created. The bikes are ordered online and then stored for a couple days before they are set up at the church. Then they get volunteers who do everything from making knit caps, handing out snacks and toys and then helping to clean up.

Quite a bit of the organization falls on Debbie Mays, the office manager at Dickess Auto Repair.

“Without her, we probably couldn’t get it done,” Dickess said. “She calls all the parents, she gets the names from schools, she does all that.”

Mays said that when Dickess hired her five years ago, he asked if she could handle the bike giveaway.

“The job I had previously, I did some work for charity and I knew John did this,” she said. “I told him I’d help him with it, if I got the job.”

No one involved in the giveaway is concerned about how much work it is.

“It is one hundred percent for the kids,” Dickess said. “We like seeing smiles on the faces of the kids, that is what we are here for.”

CHESAPEAKE — Kimberly Oldaker took the oath of office on Friday, setting the stage for her to become the first... read more