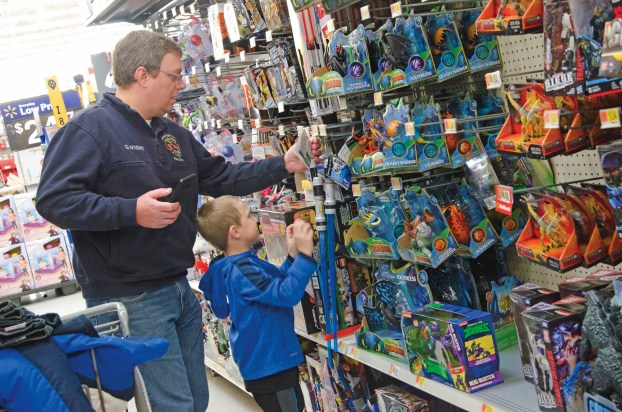 Gary Whitley, assistant chief for Proctorville Community Volunteer Fire and Rescue, looks through the toys with Jacob Adkins during the Shop With a Firefighter event at Walmart in Huntington on Saturday. (The Ironton Tribune | Heath Harrison)

HUNTINGTON, W.Va. — For the past five years, members of Proctorville Community Volunteer Fire and Rescue have been working to make sure children in the village and surrounding area enjoy the Christmas holiday.

On Saturday, a group of 12 firefighter and volunteers took nine children shopping at Walmart on Route 60 in Huntington as part of the annual Shop With a Firefighter event.

Chief Thornton Thomas said the children were referred to them by the Fairland school district and that each was given a budget of $200 to purchase clothing, needed items and toys.

“We collect donations for this,” Thomas said of the effort. “And, if we run a little short, we pay for it.”

He said the children get to determine what they need, as long as the money is spent on them.

David Graham took Dora Allen around the store for shopping.

“We bought dresses, a baby doll, which she named Rainbow, a coat, boots and she was excited to get a new toothbrush,” he said. “And we got more toys, cupcakes and she wanted Cheetos.”

He said the experience was moving for him.

“It was exciting, just seeing her skipping through the store and running down the aisles,” he said. “It makes it well worth holding a bucket and standing in the rain.”

Angie Skeens, who accompanies them, agreed.

“It bring you back to the meaning of Christmas,” she said.

After the shopping trip at Walmart, Thomas said the children were taken out and treated to pizza for lunch.

A date has been set for a man accused of stabbing his stepfather to death in August. James Franklin Wilson... read more