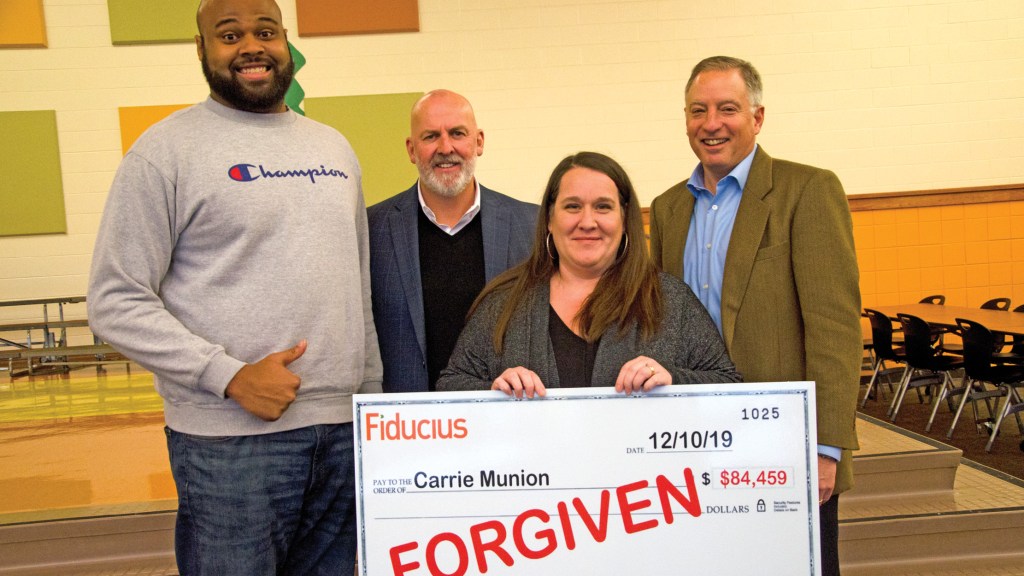 Ironton Elementary kindergarten teacher Carrie Munion is joined by officials from Fiducius, including, from left, support services specialist Jared Bryant, senior advisor Mark Darby and president Jim Zedella. They traveled from the Cincinnati-based company on Dec. 10 to honor Munion for successfully completing a loan forgiveness program and having $84,459 in debt wiped out. (The Ironton Tribune | Heath Harrison)

An Ironton Elementary teacher has had her student loans wiped out and, earlier this month, she was honored at the school for her accomplishment.

She was working with the U.S. Department of Education to repay her student loans, which also offers forgiveness for those who are a public servant, have a full time position and enroll in the forgiveness program.

While in the program, she came to use Fiducius’ service after being informed of them by the district’s superintendent.

As a result of working with the company, Munion saw her monthly payment decrease, dropping from the $700 she was paying before.

According to Fiducius president Jim Zedella, Munion ended up saving $15,000 through working with the company.

He said, many times, those working on their own will go through the 10-year program without assistance, only to find out that they were denied forgiveness, due to mistakes.

Munion, working with Fiducius, was able to complete the 10-year program in November.

Zedella said she was the first in their coverage area to do so.

“And when we heard about this, we said ‘We have to get to Ironton,’” he said.

And on Dec. 10, Zedella and Fidusius officials arrived at the school, where they presented Munion with a novelty check indicating she had completed the program and her loans were forgiven. They treated teachers to lunch, along with superintendent Joe Geletka.

“I’m happy,” Munion, a kindergarten teacher for 10 years at the school, said of the feat. “Extremely happy.”

She said Fiducius had helped her make sure everything was in order, helping her to complete the program successfully.

Zedella said their program is popular with school districts and is a positive tool for motivating more to go into education.

“It’s great for recruitment,” he said. “It can be hard to hire teachers. And it gives them a reason to live where they want to live, instead of getting a job in a big city.”