Dobbins hoping to be happy after Clemson game 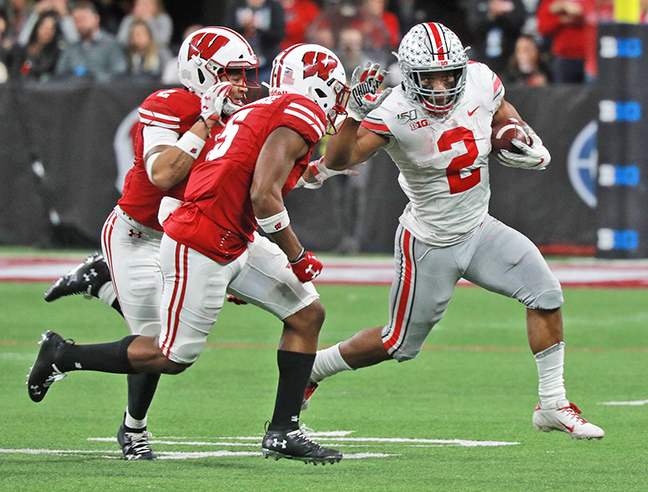 Ohio State RB J.K. Dobbins (2) tries to get around Wisconsin’s Reggie Pearson (2) and Rachad Wildgoose. Dobbins has rushed for 1,000 in three straight seasons and will be a key as Ohio State faces Clemson on Saturday in the College Football Playoffs. (MCT Direct)

SCOTTSDALE, Ariz. – After calling a sophomore season in which he rushed for more than 1,000 yards a failure, Ohio State running back J.K. Dobbins has nearly doubled his production this season with 1,829 yards.
And he’s still not happy.
“Honestly, I feel like I could have had a better year,” Dobbins said on Thursday at media day for OSU’s College Football Playoff semifinal against Clemson in the Fiesta Bowl.
“Honestly, there were some games I didn’t reach my full potential, some games I missed runs or didn’t break tackles and get explosive runs like I wanted to. Hopefully, this game coming up I can put the pieces together and actually have that great game I’ve been wanting,” he said.
Among the games this season the junior running back dismissed as not great are 211 yards against Michigan, 193 yards against Indiana, 177 yards against Nebraska, 172 yards against Michigan State, 172 yards against Wisconsin in the Big Ten championship game, 163 yards against the Badgers in the regular season and 157 yards against Penn State.
It seems that Dobbins isn’t happy unless he’s unhappy. Or more like he thinks he plays better when he’s angry and uses it as motivation.
Asked to describe his state of mind when the football is in his hands, he said, “Angry.”
Cornerback Jeffrey Okudah, probably Dobbins’ closest friend on the Buckeyes’ roster, said his friend does indeed use anger as motivation. But only for a few hours a week.
There is one J.K. Dobbins six days a week and a very different one as the opening kickoff approaches.
“Before the games he goes to a different place. During the week he’s a fun guy to be around but on Saturday he changes,” Okudah said. “It’s like something clicks in his eyes and he’s in a different place. You don’t want to talk to him.
“He has to be by himself. You can’t talk to him. He’s in beast mode. You just tell him to play and that’s all you have to tell him and he will go execute at a high level.”
Then, after the game, it all blows over until next week. “He’s back to normal,” Okudah said.
Informed of Okudah’s description, Dobbins laughed and said, “That’s definitely accurate. During the week, on regular days, I’m pretty funny and outgoing and a chill person. Then on Saturdays I’m just a different guy. Something takes over.”
Dobbins said this is nothing new for him. “Ever since I was a little kid I always wanted to win everything. It doesn’t matter what I’m playing, what I’m doing, I have to win and if I don’t, I throw a really bad attitude out there. It’s always been that way. I don’t think it’s ever going to change.”
It has worked so far. He is the only Ohio State running back other than Archie Griffin to ever put together three consecutive seasons of rushing for more than 1,000 yards.
No. 2 OSU (13-0) hopes it works for two more games, starting with Saturday night’s playoff match-up against No. 3 Clemson (13-0).