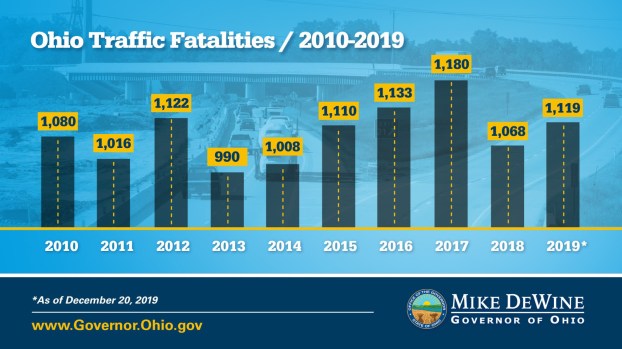 Fatalities on Ohio roads increase in 2019

COLUMBUS — Ohio Governor Mike DeWine announced today that deaths caused by traffic crashes on Ohio’s roads this year have increased over 2018, making 2019 one of the deadliest years on Ohio roads during this decade.

A total of 1,119 people have been killed in traffic crashes in Ohio this year to date, as compared to 1,068 traffic deaths during the entire year of 2018. Overall, traffic fatalities have increased in five of the past six years.

“Distracted driving involving smartphones is, without a doubt, a major contributing factor to this increase in traffic fatalities, which is why I’ve asked the Ohio State Highway Patrol to increase enforcement of distracted driving violations over the holidays,” DeWine said. “As we launch into one of the busiest travel times of the year, the way we drive will impact how many people are home for the holidays and how many people ring in the new year.”

“I’m challenging everyone to put your smartphones away while you drive over the holidays and to make it your New Year’s resolution to drive without distraction every day going forward,”  DeWine said. “If you have a passenger, ask them to read or write texts for you, or if you are the passenger, speak up if you see your driver reaching for the phone.”

Parents are also encouraged to take time to talk with their young drivers about driving distractions. Between 2013 and 2018, Ohioans age 16-20 had the highest number of distracted driving crashes, followed by drivers between the ages of 21-25.

Ohio law bans the use of any electronic wireless communications devices for drivers under 18. Texting while driving is illegal for all drivers but is a secondary offense for drivers 18 and above.