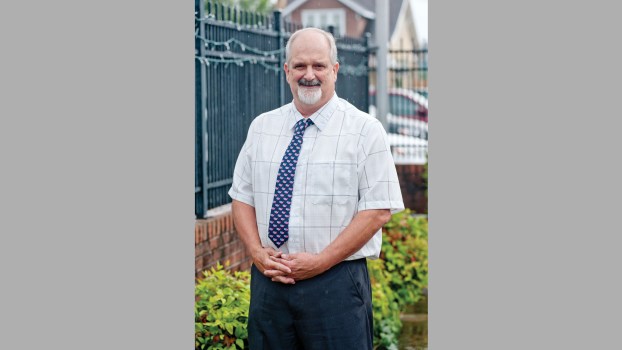 Herb Brown, a community leader in Ironton, seen in this 2017 photo, died on Christmas Eve at the age of 61. (The Ironton Tribune | Jessica St. James) 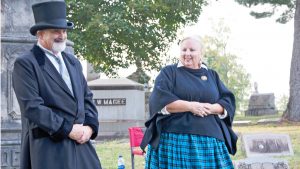 Herb Brown and his wife, Laura, portray Samuel and Eliza Dempsey in the 2019 Historic Walk by the Lawrence County Museum at Woodland Cemetery on Sept. 28. Brown, known for deep involvement with civic and community groups in Lawrence County, died on Tuesday at age 61.
(The Ironton Tribune | Heath Harrison)

Brown remembered for dedication to community

A civic leader is being remembered for his dedication to the community in Ironton and Lawrence County.

Herb Brown, of Ironton, died on Christmas Eve at age 61, after suffering a heart attack.

Brown was involved in a number of organizations around the city, including the Ironton Lions Club, the Knights of Columbus, The Lawrence County Historic Museum, Fuller House, Ironton Band Boosters, the Ironton Youth Soccer Association and the Ironton-Lawrence County Memorial Day Parade committee.

Brent and Lou Pyles, who worked with Brown on the parade committee and in the Lions Club said they were shocked and saddened by Brown’s sudden passing.

She described Brown as one of their best friends who spoke with them daily and said they had just seen him a few days earlier at their Christmas party. She said he was always available to help with Lions events, such as the Haunted Tunnel and their annual Diabetes Awareness Day.

Brent said Brown was “one of our core group of workers in the Lions Club.”

“Herb was like a brother to me,” he said. “ He was always accessible and going for that middle ground. And he would do just about anything he could for you. Any time you needed something fixed, he would show up. We spent a lot of time working in the cold together, trying to better our community.”

Brent, who will serve as a pallbearer at the memorial service, said Brown always worked for “the underdog.”

“He had a soft spot for folks, particularly children, who did not have a leg up that others did,” Brent said. “He worked hard to try to improve things and touched a number of children’s lives.

He was instrumental in getting the Ironton Youth Soccer Association together.”

He said Brown was always “right there with us” in the work and he was involved in countless groups.

“He is leaving a great legacy,” Brent said. “And he was always unassuming and didn’t seek a lot of accolades.”

Brown was asked about his community work in a 2017 interview with The Ironton Tribune about the parade.

“I’ve always liked to help out,” he said. “I feel like if I have the time and am able to do something to make a difference, I’ll always help out.” 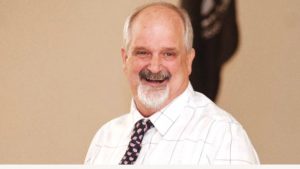 Herb Brown addresses the Past Grand Marshals dinner in advance of the Ironton-Lawrence County Memorial Day Parade in 2017. Brown, who was grand marshal of the event that year and was involved with numerous civic groups around the city, died on Tuesday at age 61.
(The Ironton Tribune | Jessica St. James)

Brown served as grand marshal for the parade in 2017 and was also parade commander and a division leader over his years of involvement with the event.

His commitment to the parade dated back to his childhood.

“When I was little, my father would always bring us to the parade. It was always a big event for us, and I think it’s still the same way,” Brown said the year he was named grand marshal. “It’s always nice to see all the veterans, children and families at the parade. It’s a humbling experience to know what some of these veterans have gone through and the ultimate sacrifice that the fallen ones have made for our freedom.”

That commitment to veterans extended to Wreaths Across America, now organized by his wife, Laura. They worked to place wreaths on the veterans’ graves at Woodland Cemetery and, this year, the group had reached their goal of getting a wreath for every soldier’s grave there.

“I feel our veterans have done such a tremendous job in protecting us and the country,” Brown told The Ironton Tribune at one of their events. “This is my way to honor them. It gives me a better feeling. This is a good way to make a tribute.”

Kay Rader, a trustee at the Lawrence County Museum, said Brown’s death was “a tremendous loss for the city and those who love history.”

“He was such a pleasant person to work with,” she said, stating there were three things at the museum he was known for, in addition to being its treasurer.

“First, he was an amiable waiter at our museum teas,” she said, then added that he also portrayed Samuel Dempsey, along his wife, who portrayed Eliza Dempsey, in the museum’s annual historic cemetery walk at Woodland.

And he was a familiar sight in the city during the holidays.

“He was the man in the tall, black hat who led the parade from church to church in our Christmas historic church walk,” Rader said “And he looked good in that big hat.”
Paul Webb, a trustee with the Knights of Columbus, said Brown had been a member of the cook team there for about 10 years.

“It just broke my heart when I heard the news,” he said. “He was such a good guy.”

“Any time you needed something, he was there,” he said “If you needed to set up tables or to raise money for our two charities, DD and St. Joe, he was involved a lot.”

Gary Holschuh, vice president of Fuller House, recalled Brown’s commitment to the group, for which he served as president.

Fuller House began as an affiliate of Habitat for Humanity and is in the process of building its 38th home in the area.

“Our mission is to provide adequate housing for families,” Holschuh said. “Herb and I worked together closely. We basically ran the construction, the office work, the paperwork and the applications for those who needed homes.”

He said Brown was always agreeable.

“We got along just fine and I don’t know of anyone who didn’t with him,” he said.

He said his contributions to Ironton were immeasurable.

“He was into so many things,” he said. “It’s a tremendous loss.”

Brown’s funeral Mass will take place at 10 a.m. on Monday at St. Joseph Catholic Church. Burial will follow in Calvary Cemetery and visitation will be from 4-7 p.m. Sunday at Phillips Funeral Home, 1004 S. Seventh St., Ironton.

An Ironton Elementary teacher has had her student loans wiped out and, earlier this month, she was honored at the... read more