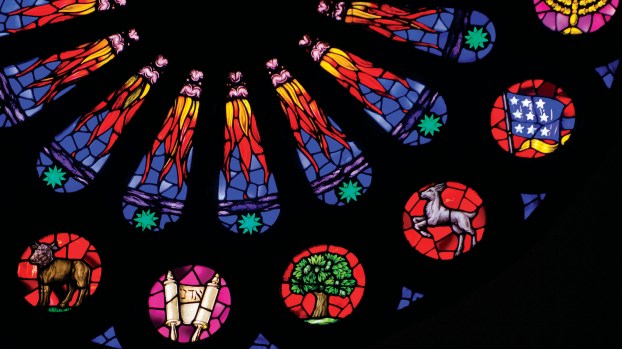 The sanctuary windows at B’Nai Sholom were designed by Henry Hunt of Pittsburgh and created using hand-blown glass by Blenko of Milton, West Virginia, known for its unique ruby red and vintage blue palette. (Photography by J.Bird Cremeans)

As varied as people are the ways they worship their creator. In fact, what could come in greater variety than how human beings define their creator.

But with differences come similarities. One similarity is the decoration of the houses of worship. Whether Jewish or Christian, in the Tri-State those houses use stained glass windows prominently.

“In any place of worship this is like music,” Tom Pressman of Huntington, West Virginia, said. “It is to prepare you to reach out and communicate with God.”

In 1981, Pressman joined the B’Nai Sholom congregation that meets at the synagogue at the corner of 10th Street and 10th Avenue in Huntington.

Built in 1925, the synagogue was first the home of the Ohev Sholom reform congregation. That congregation dates back to 1887.

There for many in the congregation, the stained glass windows add to the spirituality of a worship service.

“They give a beautiful presence,” said Linda Klein who joined B’Nai Sholom 12 years ago. “On one side are the forefathers and the other side are the prophets. It makes them come alive.”

Those sanctuary windows were designed by Henry Hunt of Pittsburgh and created using hand-blown glass by Blenko of Milton, West Virginia, known for its unique ruby red and vintage blue palette.

She toned down the colors in the windows to come up with paint for the arch around the pulpit.

For Pressman, the windows play a unique role in his worship.

“In the evening when the sun is setting, it is really spectacular,” he said. “It makes a great deal of difference.”

In 1846, Ohio-born ironmaster and abolitionist John Campbell proposed the creation of Ironton. Three years later the first lots were sold. Then in 1859, 25 men met at the Lawrence County Courthouse to form Christ Episcopal Church.

For the next year the church alternated meeting at the courthouse and the Methodist Church.

The first Episcopal Church was built on the site of the recently razed parish hall in 1855, seating 125 and costing $700.

Bishop McIllvaine was to make his first visit in June 1855.

“But river traffic was delayed that year while the boat was being repaired and the bishop’s visit wasn’t until April 1856,” a church history states. “Old records tell that people poured out in droves to hear this preacher.”

Then in 1872 A.R. Kieffer was ordered by the bishop to take over the parish.

“We have endured much persecution during the past year,” Kieffer wrote. “Only time can overcome the prejudice of these people that episcopacy is papacy.  The parish has been so long without a rector. Unless the Holy Spirit soon stirs up the hearts of these people for the cause this mission will be a failure. Can these dry bones live? At present writing, I almost despair of seeing this re-animation.”

But re-animation apparently did happen for on October 1896 ground was broken for the current structure on the corner of Fifth Street and Park Avenue. A month later the cornerstone was laid in which were placed a prayer book, a hymnal, a list of all members, three Ironton newspapers and a copy of the city directory.

Cost to build the current church was $17,350. In the narthex is a four-panel approximately four-foot high mural of Jesus with small children flanked by two sentinel angels. Behind the altar is a comparable mural in size of Jesus and the woman at the well.

“Such a building today would cost a hundred thousand,” Charles Collett wrote in the Ironton Soliloquy.

The oldest church in Ashland is First Presbyterian on the corner of Winchester Avenue and 16th Street. This summer marked the church’s 200th birthday.

However, that building isn’t on the first church site. Originally the first congregation met in the home of Major James Poage, a member of the family that came from Virginia to found the settlement that became Ashland. At that meeting, they decided a church would be built near Pollard Road.

In 1828, George Poage donated acreage from his farm near where now is the Mid-Town Shopping Center to move the church there.

There on either side of the sanctuary massive rose windows dominate.  Radiating out like wheel spokes are petals each bearing floral designs within. The color scheme is made up of dark and light browns, pale blue and magenta.

“Their beauty is inspiring,” member Amy Crookes said. “They represent the commitment given by the congregation to the mission of the church.”

Judy Fannin came to Ashland in 1962. She alternates her Sunday worship between First Presbyterian and First Christian, Disciples of Christ, a denomination church historians say evolved from the Presbyterian denomination.

A favorite of Fannin’s at First Presbyterian is the window in the music room.

“There is nothing more beautiful than seeing a bride framed by the stained glass window in that room,” she said. “Or your precious loved one at rest beside the Cathedral Window of Light at First Christian Church,” Fannin said.

That window frames a mini-garden inside First Christian, whose current structure was built in 1990.

The sanctuary nearby the garden has two full glass walls made up of nine panels. Each is 4 by 12 feet weighing 650 pounds.

Church literature calls the etched panels teaching windows detailing the life of Jesus as told in the Book of John. Panels include “Descending Dove,” “The Shepherd’s Crook” and “The Cross with Crowns of Thorns and Royalty.”

The interim senior pastor at First Christian is Dr. Robbie Phillips, who in his career has served many churches.

“Stained glass windows not only reveal the beauty within religious icons and foster reflection, they reveal beauty within the artist (and the Child of God) as he or she creates using their giftedness.”

Rising 15 feet above the main floor at the sanctuary is the Window of Promise, comprised of four panels around a 16 foot Jerusalem Cross, made of bricks. Each panel was designed by Emmanuel Stained Glass of Nashville.

This window has a special meaning for longtime member, Barbara Clark.

“Our old sanctuary holds a place in my heart because of the memories of my baptism, singing in the choir and worshiping by candlelight at Christmas,” Clark said. “But the beauty of our current stained glass window enhances the worship experience visually and scripturally by the symbols chosen to represent the lessons from the Gospels. And when the sun shines through the vibrant colors the light of Christ is in our midst.”

Vinyl store gets its groove back