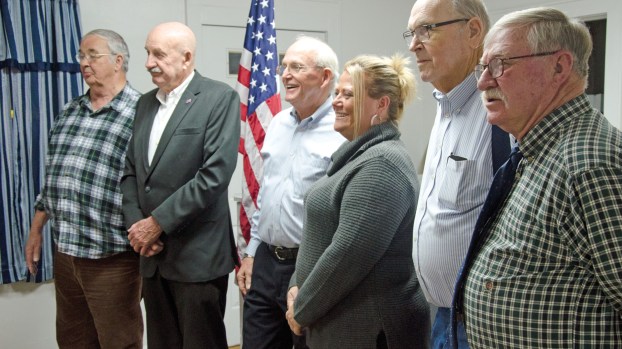 CHESAPEAKE — Chesapeake filled a vacancy on its village council on Thursday, making two changes to the body as it begins its meetings for 2020.

The vacancy was originally to have been filled by council, but, due to absences, there were not enough members for a quorum to fill the seat in December.

Outgoing Mayor Tommy Templeton was then eligible to pick the successor before his term ended on Dec. 31, but he left the choice for Oldaker.

The other change to council is the return of Paul Hart, who retired two years ago, due to a filing error with the board of elections, but ran again in 2019, defeating incumbent Randy Penix.

Smith was sworn in by Oldaker, while his wife, Alice held the Bible.

He said he was originally born in Huntington, West Virginia, but has lived in either Chesapeake or neighboring Union Township his entire life.

A retired Marine, he has worked as a bailiff in Lawrence County Municipal Court and as a security officer in Cabell County, West Virginia.

It is his first time holding a public office.

“I’m very proud of the fact that the mayor saw fit to give me a shot at it,” Smith said. “I feel like I have something to offer.”

Randy Thompson, the village’s police chief, spoke highly of Smith at the swearing in ceremony.

“I don’t think there’s a better person than you for this job,” he said.

Council member Richard McMaster said Smith would be “an asset” to the group.

“And we’ll work hard and do our best to take care of our residents,” he said.

Smith said he was appreciative of the crowd that turned out Thursday.

“I want to thank everyone for coming,” he said. “I really appreciate the turnout and you putting your trust in me.”

The council members said they were optimistic that the group would work well together in the coming year with the new mayor.

Former Mayor Dick Gilpin was present for the event, and he urged all on council to help her to grow into the job.

“I had the privilege and the honor to serve the community for two terms,” he said. “You never know what you’re getting into until you start,”  he said. “We all need to help her.”

Amongst the last indictments from the Lawrence County grand jury in 2019, two people were indicted for the removal of... read more