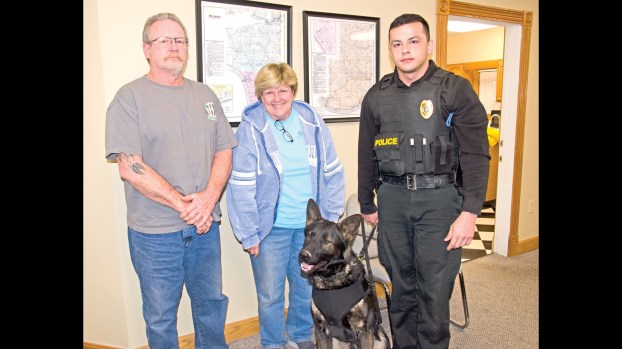 SOUTH POINT — South Point’s new K-9 will now have some protection on his job.

Ammo, a German shepherd, was certified and went into service late last year. He was present, with his handler, South Point Police Officer Jordan Reyes, at Tuesday’s meeting of council.

The dog was wearing a new bulletproof vest, which was purchased by People for the Point, a community organization in the village.

Police chief Chris Mahjer said many K-9 units are killed in the line of duty and his department appreciates the donation.

Linda Main, with the organization, also thankED the council for their support with the Christmas Extravaganza last month, which featured a breakfast with Santa and Christmas market. She said they are already beginning to plan the two-day Fourth of July celebration for the village.

Police issues were a focus of the council meeting.

Mahjer came to council with a request for four new cruisers for the department and raises for part-time employees.

“This is my vision,” he said of the goals.

Mahjer suggested tweaking the fines for citations in the village to cover the costs.

The council discussed the matter and all agreed that the department should be properly equipped and staffed. Council member Chuck Austin said that many ran on the promise of keeping the village secure.

Rather than change the fees, the council instead proposed appropriating $52,000 to the department for the three-year leases on the vehicles. Mahjer would also move employees in the department up into vacant positions.

“We’re going to be giving raises, people will moved into high paying, vacant positions and we’ll be making vacant positions pay more,” Mayor Jeff Gaskin said. He said the village is in a good financial position to make the investment.

The council agreed to the lease and the appropriations changes will need to be voted on at next month’s meeting of council.

The council also voted 6-0 to pass a new vicious dog ordinance, after removing the three reading rule for the proposal.

The village repealed its previous ordinance last year, as Ohio law forbids breed-specific ordinances. A committee of citizens was appointed to propose a replacement.

Gaskin said the new ordinance is in line and mirrors the state law.

• Hosted an organizational meeting, in which Gaskin swore in returning council members Austin and Michael Lynd. The mayor was sworn in for his second term on Saturday by Lawrence County Common Pleas Judge Christen Finley.

• Moved to change the time for monthly meetings of council. They will not take place at 7 p.m. on the first Tuesday at each month, a half hour earlier than the previous time.

• Appointed Austin as president pro tempore, who will fill the duties of the mayor if he is unavailable.

• Heard from a representative of the county health department, who gave details on the proposal for a county nuisance officer.

• Heard from Vallery Dyer and Les Boggs, who are both running for the position of Lawrence County Auditor.

• Heard from village administrator Russ McDonald, who said the village will be contracting out a tree trimming job that is too large and dangerous for village employees.

• Heard from Proctorville veterinarian Mike Dyer, who offered praise for the Lawrence County Animal Shelter, which he said has a euthanasia rate of “basically zero.” Dyer also said he would put the village in touch with a group he works with that traps, neuters and spays and releases feral cats, in order to help the village with an existing cat problem.

In its first meeting of the new year, the Ironton City Council will consider design services for the waste water... read more