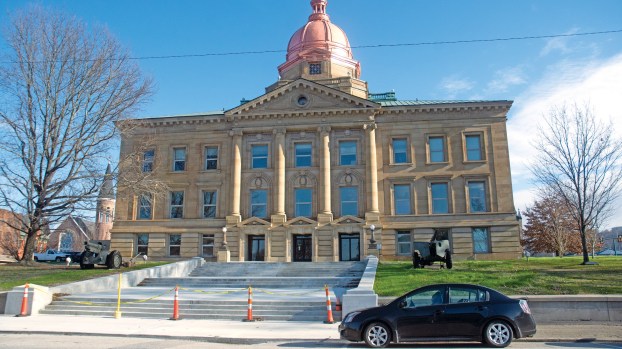 A view of the Lawrence County Courthouse with its new steps. Once new aluminum railings are installed, the Fourth Street entrance will be reopened. (The Ironton Tribune | Mark Shaffer)

Soon, the doors to the Fourth Street entrance to the Lawrence County will be unlocked again providing two access points for the public.

But first, hand rails have to be installed on the new steps.

The new ramp was installed on the Fourth Street side to make access to the courthouse easier.

There is access on the Fifth Street side, but it isn’t ideal.

“If someone is in a wheelchair or has a broken leg, it is hard to maneuver through the turns,” said Chief Deputy Auditor Chris Kline.

On the Fifth Street side, there is a ramp but it has three right angle turns that makes it difficult. The new ramp is a straight shot to the entrance on Fourth Street.

“And we made a new place for handicapped parking for a van on Center Street,” Kline said. “There isn’t any parking on Fourth Street, really.”

The outside renovation also included new steps put in to replace ones that were poured in 1971.

“Now, there are no cracks, no broken steps for people to trip over,” Kline said.

As for when the new ramp and steps will be open, Kline isn’t sure.

“The aluminum railing has been ordered and we are waiting for it to come in and get it installed,” Kline said. “Then we can get that entrance open to the public again. I don’t know when that will be, we weren’t given a date. We are just at the mercy of the supplier as to when it will come in.”

One surprise on the Fourth Street side was a Statue of Liberty that was presented to the county by the Boy Scouts of America in 1951,

Over the decades, the statue had corroded and wasn’t looking its best. As part of the construction, Lady Liberty was put into storage until the work was done.

When it was re-installed, the statue looked new.

“The company did the work, they had it sandblasted and painted as a surprise to the county,” Kline said. “It wasn’t named as part of the project, they just did it while it was in storage.”

The outside work has been part of a bigger project of renovating the courthouse that has included new elevators, a new roof, energy-efficient lighting, upgrading the heating and cooling systems, sealed off potential leaks with new mortar, made the annex better match the original courthouse, fixed crumbling architectural details and returned the dome to its original copper color. A parking lot for courthouse employees was expanded and a security gate installed.

The total cost of the project was $6.5 million and was overseen by The Perfection Group, based out of Cincinnati.

The money for the project came out of the one-time $4 million in funds from the state, which was given to counteract the loss of the Medicaid Managed Care Organization sales tax.