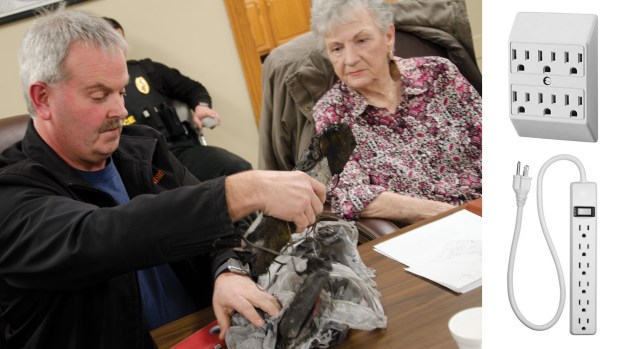 South Point council member Marlene Arthur watches as the village’s fire chief, Mark Goodall, shows those at the meeting at village hall on Tuesday a burned out power strip, which was overloaded and caused a fire that crews were able to extinguish. (The Ironton Tribune | Heath Harrison)

From it, he produced the culprit to a recent fire his crews had to respond to.

He pulled out a blackened power strip to show the council and Mayor Jeff Gaskin. A tangle of computer cords were burnt into it.

“It got hot and the carpet caught fire,” Goodall said. “It is very important not to overload these.”

He said his crews regularly respond to fires caused by overloaded power strips and extension cords, on which people are relying on too much.

“We’ve had some cases where they have cords hanging over bookcases,” he said, adding that, in one home, residents had box fans hanging from the ceiling, using them as ceiling fans with extension cords running to them.

“it is very dangerous,” he said. “Luckily, we didn’t lose that house.”

He said another popular item is dangerous to use in the home, referring to multi-outlet adapters that plug into an electric socket and allow the use of four to six plugs. He said they are commonly sold at local dollar stores.

“I wish I could just take them all and throw them away,” he said. “Do not buy these.”

Council members thanked Goodall for the tip and asked if he and the department would be willing to post a monthly safety tip on social media, to which he agreed.

Goodall said he and the department work with local schools to promote fire safety, bringing things such as a smoke house so that children will learn how to evacuate in case of a house fire.

He also gave the council a report on the department’s activities for December. He said calls included five structure fires, three EMS calls, four overdoses and one vehicle vs. pedestrian call, among others.

The Ironton Police Department has released its statistics for 2019 and the chief is happy to see that the number... read more