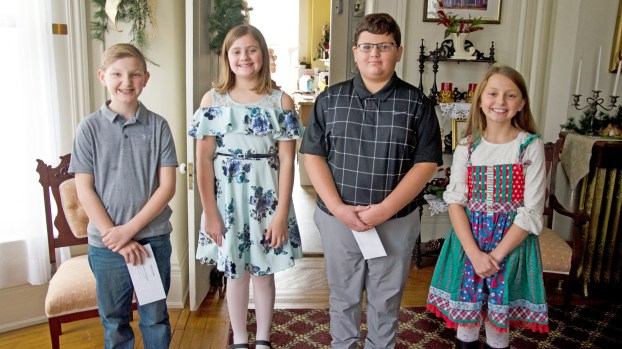 Winners were announced at a reception in December for the annual history essay contest at the Lawrence County Museum.

The writing competition is open to all fourth graders in the county and the schools send their top five essays to the museum to be judged.

Here are the winning essays from the contest:

The Macedonian Church was the first African American church built in Ohio. The church was built in 1813, and it is located on Charlie Creek Hill. In 1849, the original Macedonian church was replaced with a structure that stands today!

The slaves who went to the Macedonian Church had to hide at day and travel at night because they didn’t want to get put back into slavery. Could you imagine the worry of getting caught and being returned to slavery?

The slaves who went to the Macedonian Church must have been terrified with the worry that they might be returned to their evil masters. These slaves prayed and sang hymns to remain at peace during their fearful times.

I am glad that we live in this country and this century, where there is no longer slavery.

The End of Slavery

A news article from Aug. 28, 1868, three years after the Civil War, describes the racial harmony at a Macedonian Church gathering:

“Last Sunday, between 1,000 and 2,000 people were on the hill — half of who were white. Perfect equality seemed to crown the entire multitude. White and black, side by side, sipped their lemonade or sat by the sanctuary.”

Due to this, the Macedonian Church continued to grow and a new building was needed.

In conclusion, the Macedonian Church was an important part of our history. It hid slaves at day and at night, and slaves were even able to attend church.

It united both black and white people, helped serve as a beacon of hope with the Underground Railroad and stands as a historical reminder today.

On Dec. 2, 1966, one of the most tragic events in the history of lronton took place.

Lives were taken and husbands, sons and dads would not return home after the jailbreak of 1966.

I interviewed Grover Carter who was on patrol that day, here is his story:

I went to work around 8 a.m. that morning. I was in the first ever Police Academy in Ironton as the jailbreak took place. The entire department was out that day. They were either at the academy with me or out on patrol.

Around noon, Ofﬁcer Sherman Winters and I were on lunch break. We were eating at King’s drive in.

He told us that a prisoner had been brought from his cell to make a phone call and somehow managed to get control of an officer’s gun. Then the prisoner ordered a deputy to release other prisoners.

The four prisoners who were involved in the jailbreak, whom he named by last name were Baley, Halleck, Browning and Jenkins. The Ironton Police Department allerted all officers. The responding officers were chief of police Jean Markell and Ofﬁcer Charles Ales. I was also told that the chief had entered the jail first and attempted to take control of the gun. He was shot by prisoner Carl Halleck.
By this time officer Jiles had made it in the jail.

“Don’t fire!” said Officer Jiles. “I just need to check on the chief!”

Of course he was talking about the chief who had been shot. Prisoner Halleck then shot officer Jiles in the back. Also responding to the call was Capt. Holmer Fuggett and highway patrolman McCloud.

Now a shootout was happening outside of the jail, in which Captain Fugett shot prisoner Bailey.

Prisoner Jenkins and Browning were recaptured, but prisoner Halleck got away.

Later, there was a man who wanted to turn himself into the sheriff. The man was prisoner Halleck.

May 13, 1914 was a day that forever changed Lawrence County.

Imagine how John Clary felt when he came across Robert Massie’s dead body on that Friday in May. John Beard was an 18-year-old farmhand for the Massie’s farm and was the man responsible for the brutal triple murder.

The triple murder took place in Lecta, on the Massie’s farm. Along with Robert, Mary and Nancy Massie were also victims to this horrific crime.

The Massie’s were the wealthiest farmers in Lawrence County.

Motivated by money, John murdered the Massies. Nancy and Mary got their throats cut by a razor, Robert Massie got his skull crushed.

They were discovered the next day by their neighbor John Clary, who walked to their farm to borrow some equipment. After John murdered the Massies, he left for Chicago and Sheriff Sloan was after him.

Communication by telegram between law and enforcement in Chicago and Ironton served the purpose of showing Beard’s whereabouts.

Reporters say there were 1,000-8,000 people at the Massies’ funeral. Within days, John Beard was charged with first-degree murder and brought back to Ironton.

After confessing the murders to Sheriff Sloan and testimonies from 13 witnesses, the trial date was set.

On May 15, 1914, John pleaded guilty of his action to Judge Edward E. Corn. On Sept. 28, 1914, John was ordered a mental evaluation before getting a capitol punishment.

On Dec. 4, 1914, justice was served and John Beard faced death by electrocution. The murders that occurred on Greasy Ridge that past April greatly affected the citizens and justice system of Lawrence County and served as a significant historical event in our county.

Early means of communication transportation, such as trains and automobiles and receiving accounts from witnesses all played a role in shaping the story of this crime.

The Ironton Tribune served as a time capsule in retelling the events that happened in 1914 one hundred and five years ago.

Lawrence County loves football! At one time, lronton had its own professional football team, named “The lronton Tanks.”

While the professional game was started a century ago, here ,locally, we still have some things left from the days of old, including the stadium that was built for them.

The love of the game has led me to write about the lronton Tanks, one of the ﬁrst semi-professional football teams.

n order to make a living, some were given teaching jobs and coaching jobs locally while playing. As they continued on, crowds continued to increase in size at Beachwood Park, sometimes reaching as many as

To ﬁt everybody in, a covered stadium was completed in 1926, currently named Tanks Memorial Stadium. This is where the lronton Fighting Tigers high school football team currently plays. This stadium still stands today.

The lronton Tanks were very good some years they played. They played teams such as the Chicago Bears and the New York Giants in their history. They played 118 games and won 85 of them, along with 19 losses and 14 ties.

While the lronton Tanks kept playing through the 1920s, by 1930, they stopped playing, due to the lack of funds during the Great Depression. Many players started playing with the Portsmouth Spartans until theym toom stopped playing in 1933.

This franchise then moved on to become the Detroit Lions, a team that still plays today.

The Thanksgiving Day game tradition of football being played on that day can be traced back to the lronton Tanks.

Tanks Memorial Stadium, while being remodeled and changed over the past years, is still standing, and this makes me proud to live in lronton and cheer on the Fighting Tigers today.