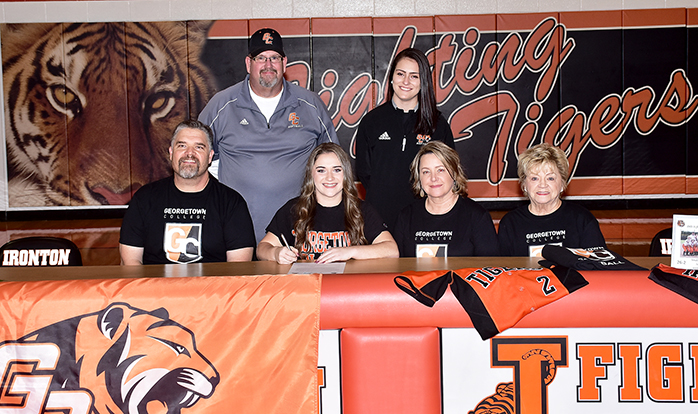 If Peighton Rowe had worked for Walt Disney, she probably would have been the one who wrote the song, “High Ho, High Ho, It’s Off To Work We Go.”
Work has been at the forefront for the Ironton Lady Fighting Tigers’ senior softball standout. And it’s that work ethic that has helped her achieve a life-long dream to play at the college level.
Rowe was able to wipe the sweat from her brown long enough to sign a letter-of-intent to play for the NAIA Georgetown College Tigers.
“My strengths are being a teammate, my love of the game, being passionate about it. I bring that fire to the team. But hitting is a strength of mine and just my ability to work,” said Rowe.
“Coming from Ironton, work ethic is built into us. Everyone takes pride in what they do. My dad has pushed that on me since day one. He’s an Ironton Tiger fan all the way.”
Last season, Ironton advance to the Division 3 regional tournament for the first time in the program’s history. Rowe had a .403 batting average and scored 25 runs.
Rowe was first team All-Ohio Valley Conference and second team Southeast Ohio All-District.
Rowe began playing tee ball at the age of 4, shifted to softball at the age of 7 and then began playing travel ball the following year, something she has continued to play every following year.
“I’ve not had a summer off since I was eight,” said Rowe. “I’ve worked so hard, I just want to enjoy my last year in high school and enjoy me time with my friends my senior year and that way I can work when I get in college.”
Her summer tournament schedule is where Georgetown head coach Thomas Thornton got to see Rowe and her strengths and helped him decide that she was the kind of player his program likes on the roster.
“She and I kind of joked that the day. I happened to have time so I went to watch her play in Columbus and she swears it’s the best day she’s ever had in a tournament,” Thornton said with a laugh.
“But she impressed me. She batted lead-off for her team that day, played second base, made some really good plays on the defensive side and went 2-for-3 or 3-for-4. That jumps out at you.
“I went back and tried to watch her another game that wasn’t as good but the form was still there, she just didn’t get the results she got in the first one. That’s all I look for. They’re not always going to be their best, but is the form consistent. And she is. She’s exciting and she’s excited to play and that’s the girls you want.”
Rowe’s excitement and love for softball has been there since she her pre-school days. She has also played high school volleyball and some basketball in grade school and middle school, but she said they can’t compare with her love for the diamond.
“Softball has always been my favorite. I always wanted to play college softball since I was nine. This has been a goal of mine. I’ve never been burned out on it,” she said.
The college choice was between Ashland University and Georgetown. Eventually, she let spiritual intervention help her with the decision.
Ashland University where her father, Joe Rowe, played football and her mother, Krissy, went to nursing school.
“They didn’t meet there but they both went to the same school,” said Peighton.
“I got an offer from there and I had a deadline, but God sent me on a path and Georgetown came my way and faith has led me since then to decide on Georgetown. God gave me the gift to play softball and I didn’t fret about my decision. I just let God lead me to it.”
When Rowe gets to Georgetown, Thornton said he doesn’t plan to pigeon-hole her to one position.
“I like her as a middle infielder, but she knows I’ve got a freshman shortstop this year and a sophomore second baseman. She has the ability to move around and play some other position. And we’re going to move her around when she gets on campus to see where she fits,” said Thornton.
Rowe said she is fine regardless of the position.
“I’m a utility player and basically they see me playing middle infield or outfield, hopefully, second base. Once I get there and go through the workouts, I think that’s where he’ll put me. But I’ll play anywhere,” she said.
Rowe plans to major in pre-med and plans to become a psychiatrist.
“I like talking to people and helping figure out their problems,” said Rowe.