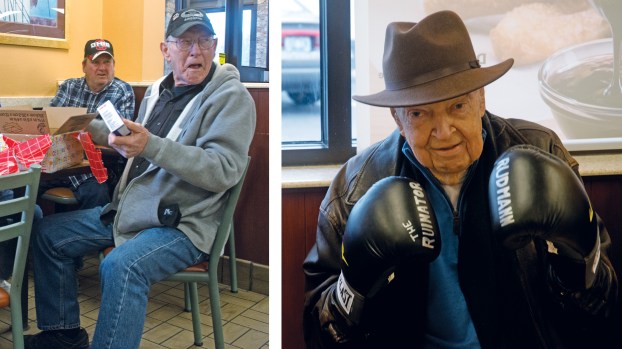 RIGHT: Lawrence Rudmann shows off a pair of boxing gloves that his friends gave him as a 97th birthday gift on Monday morning. LEFT: Bill Kerns laughs at a gift of Band-Aids his friends gave him on Monday morning for his 84th birthday. He frequently had to use Band-Aids on his knees after landing after jumping out of airplanes as part of the 101st Airborne. (The Ironton Tribune | Mark Shaffer)

Lawrence Rudmann and Bill Kerns got a surprise on Monday when friends and family gathered for a combined birthday at the place they hang out and talk.

Friends they had made at the McDonald’s in Ironton had secretly arranged a birthday party to honor them on their birthdays. Rudmann turned 97 Sunday. Kerns is turning 84 on Wednesday.

The two men have been friends for years, bonding over their time in the military, both were in airborne in the army and served in combat, although in different decades.

Rudmann was drafted in 1983 and joined the U.S. Army 82nd Airborne. After training, he was sent to England and jumped near Normandy Beach as part of the D-Day invasion effort by the Allies to drive the German army out of France. After five days, he was captured by the Germans and spent 11 months in a POW camp before being liberated May 14, 1945.

He said it was terrible. He was head butted by a German and he distinctly remembers the food, when they did get fed.

“We were served grass soup with maggots in it,” he said. “I started pulling the maggots out, but, if I did that, there would be nothing left.”

After the war was over, he decided not to stay in the army.

He returned to Ironton and got a job at Allied Chemicals at South Point and Haverhill.

Kerns joined the U.S. Army 101st Airborne in 1953 and fought in the Korean War on the 38th Parallel and did two combat jumps. He was just 17 when he joined.

“I was a junior at the old Pedro High School and I hated it,” he said. He went home one night and told his dad he wanted to quit school and go in the military. “He said ‘It’s the best thing that ever can happen to you, son, because you’re going to be in jail by the time you’re 20.’”

He said he didn’t mind the military and had 43 combat jumps.

After the war, he joined the Detroit, Toledo and Ironton railroad company and spent 35 years going 400 miles between Ironton and Dearborn, Michigan.

The two frequently talk at McDonald’s and, after Kerns found out that German soldiers had taken Rudmann’s silver jump wings and hat as prizes so many years ago, he ordered him new wings and a ball cap with his unit logo on it.

“He was tickled to death,” Kerns said.

On Monday, they each got gifts that had a joke behind them. Rudmann got a pair of boxing gloves with his name on one and a nickname of “The Ruinator” on the other.

Kerns got a large box of Band-Aids, a reminder of his time in the Army, since the jumpers would have to bandage up their knees after landing.

Rudmann’s daughter, Joanie Adkins, said her dad was surprised by the party.

Steve Shaffer, owner of the Fabric Crafters Upholstery store in Ironton, was one of the organizers of the party for the two veterans.

“We just love those two old guys and wanted to show our appreciation today,” he said. “It worked out great.”

Ruddman said he never expected to live to be 97.

Kerns said, at 84, he figures the Good Lord but be with him.

“I’m not bragging, but I’ve been through a hell of a lot,” he said. “Over in Korea, driving back and forth on that railroad. But, I’ve had a good life.”

COLUMBUS (AP) — A plan to address multiple problems that a federal audit identified with Ohio’s Medicaid system has been... read more