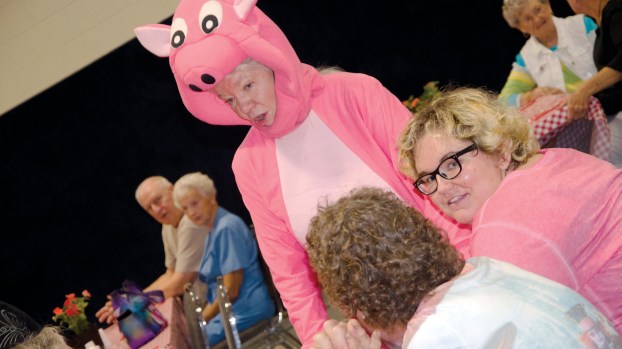 Volunteer Lois Terkhorn speaks with guests during Harvest for the Hungry’s silent auction and dinner fundraiser in August. The pantry has announced two fundraisers for March, including one for National Pig Day on March 1. (The Ironton Tribune | Heath Harrison)

Harvest for the Hungry will be celebrating National Pig Day with a fundraiser on Sunday, March 1.

Lois Terkhorn, a volunteer for the pantry, said they have done the event in past years.

She said, after speaking with Harvest director Diane Porter, she learned that the event fell on National Pig Day.

“I said, ‘That’s perfect,’” Terkhorn said. “And that’s how I became the pantry pig.”

Turkhorn wears the pig costume at many of Harvest’s events in the community, such as their annual silent auction and a fall festival.

“And I’ve worn it to church to remind people,” she said.

She said everyone is invited to attend the fundraiser for a suggested donation of $3.50. It will run from noon until 2 p.m.

She said another fundraiser is scheduled for March 22 at First Presbyterian Church, with a concert by Kelly’s Bridge.

The pantry serves thousands of people in the region, distributing food year round to those who signup and meet income qualifications.

They operate on donations from the community, as well as through funds received from grants.

At Thanksgiving, they host a major effort to provide a full meal package to families.

At tonight’s meeting of the Ironton City Council, the main item on the agenda is salaries of the city’s non-union... read more