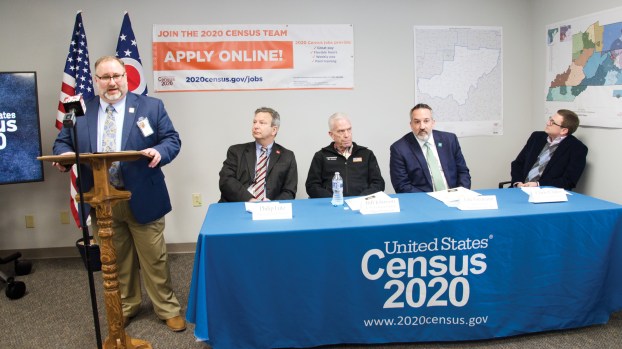 SOUTH POINT — Government officials and community leaders gathered in South Point on Thursday for the opening of the Area Census Office and the official kickoff of operations for the 2020 U.S. Census in the region.

The office, located at 1405 County Road 1, is one of 248 in the county and will serve 25 counties in southeastern Ohio.

“This is where operations will be managed,” Ronnie Tyree, the manger of the office said. “We’re excited to get things rolling.”

He noted that the census has been taken every 10 years since 1790, two years after adoption of the U.S. Constitution.

He said this will be the first year that citizens will have the chance to respond to the census by mail, phone or online and that they would be getting notices in March in advance of Census Day on April 1.

Throughout the year, enumerators would be hired to go out to homes where no response was received, to determine if they are vacant or to get information on how many reside there.

“The goal is simple — to count everyone, count them once and in one location,” he said.

He said the idea is that a person claims residence at the place where they “live and sleep most of the time.”

“That may not be the same as their legal, permanent address,” he said.

Tyree said that, not only does the census provide an accurate count of the population, it plays a part in determining things such as allotment of funding for government programs and projects.

U.S. Rep. Bill Johnson, R-Ohio, said it also affects the number of congressional representatives a state has, noting that Ohio has 16 now, a drop form past decades when it had more than 20.

“We could lose a congressional district,” he said. “it is important that we do this right.”

He said it also determines the number electoral votes the state gets to cast in a presidential election.

Phillip Lutz, the deputy regional director for the Philadelphia Regional Census Center, spoke about questions that have been added over the years, which allow a study of breakdown of population by income and other factors.

“Every 10 years, we take a portrait of America, to see how we’ve changed,” he said.

Tyree encouraged the local leaders at the kickoff to promote the census in their communities and stress the importance of completing it.

He said the census will have 12,000 workers throughout the region and that they are still hiring.

He said these positions have flexible schedules and allow workers to set their own hours.

“We are still actively recruiting,” he said. “If you know anyone looking for a job, tell them. It’s a great way to earn extra money while serving the community.”

Those interested in working for the census can visit https://2020census.gov/en/jobs online.