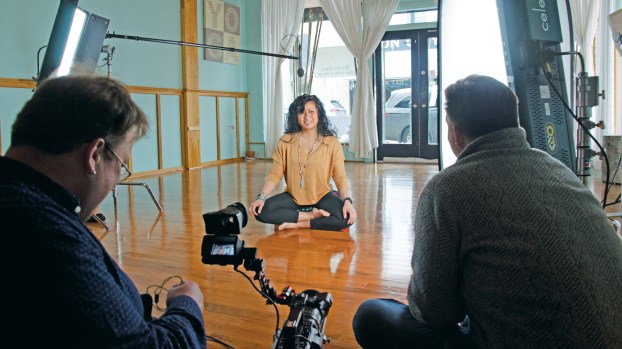 Viviane Khounlavong is interviewed in her yoga studio, Studio Dara, on Friday by Brad Bear, of Bear Media Services, left, and Jeff Ford, of Millimeter Creative. The pair are making a video for HGTV’s Home Town Takeover contest, which the lifestyle channel will come in and help revitalize a downtown area. (The Ironton Tribune | Mark Shaffer)

Some citizens of Ironton are looking for a takeover.

While HGTV is well-known for its house makeovers, the Home Town Takeover project is much bigger. The lifestyle channel will have Home Towns hosts Ben and Erin Napier come to a town and help revitalize the downtown area.

Bear, with Bear Media Services in Ironton, saw an announcement on Facebook about it and decided to grab a friend to create a video to highlight Ironton and its energy.

“The crux of the show is they want to do some impactful changes in a small town and make it better than they found it,” he said. So, he called Ford with Millimeter Creative, who was originally from Ironton and now lives in Cincinnati, to team up and put a pitch video together.

Ford said every time he comes back to Ironton, he notices a change in the energy of the town and see the changes in the downtown. He said he was instantly on board with the project when Bear called.

For their contest, HGTV is looking for a town with a population of less than 40,000 that has great architecture and a Main Street that needs a facelift. Bear and Ford feel that Ironton is the perfect place for this with things like a many long-time businesses and the Ro-Na Theater, which has become a center for community events. So, they interviewed a number of business owners.

Bear said rather than talk to economic development people and politicians, they decided to focus on people on the grassroots level who are making things happen. So, they talked to Rich Donohue, who is expanding his business, Central Hardware, Joe Unger at Unger’s Shoes, Rick Jansen with Friends of Ironton and their effort on redoing the Ro-Na Theater into a community space and Amanda Cleary and Abby Kuehne, co-owners of the The Vault Market.

“We look at the energy that they are all bringing to downtown Ironton,” Bear said. “We are trying to tell the story that Ironton is reviving and HGTV could come in and really help us.”

On Friday, they interviewed Viviane Khounlavong at her Studio Dara about why she has a yoga studio in Ironton and the energy of the city.

She had a good reason for agreeing to be in the video submission.

“I love Ironton,” she said. “It’s pretty simple. I just believe our community deserves to be displayed positively for the energy that is being harvested here.”

Ford said, even if at the end of the day Ironton doesn’t win the opportunity from HGTV, the process of making this video is still a win.

SOUTH POINT — The South Point school board will meet in a special session tonight regarding an investigation into an... read more