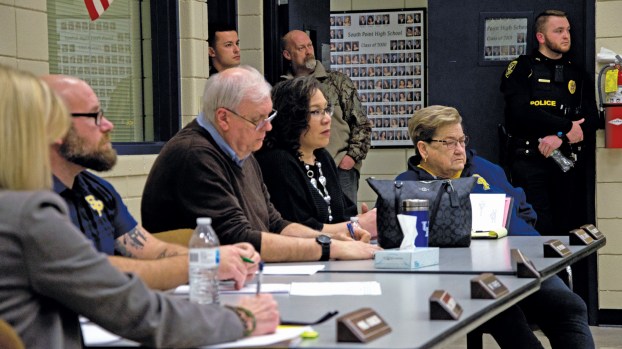 ABOVE: The South Point Board of Education had a special meeting on Wednesday to address the issue of audio recordings of two faculty members from an incident at the middle school last week. BELOW: Nearly 200 people turned out for the special meeting. (The Ironton Tribune | Heath Harrison)

SOUTH POINT — The South Point Board of Education met in a special three-hour session Wednesday night to address the matter of audio recordings of an incident involving the principal and a teacher at the middle school.

The board offices were crowded, with nearly 200 people showing up, exceeding the number of available chairs and with some attendees overflowing into the hallway.

Posts appeared on social media last week, which board officials confirmed contained audio of principal Mylissa Bentley and a teacher, who could be heard angrily reprimanding a student.

The posts had gone viral, with many taking issue with the tone of the faculty members. The school district announced that both had been placed on administrative leave and an investigation would be conducted by Lawrence County Educational Services Center Superintendent Jeff Saunders.

South Point Superintendent Mark Christian was asked to recuse himself from the investigation.

Wednesday’s meeting was scheduled for the board to receive Saunders’ findings.

Board president Josh Parker said the purpose of the meeting was to discuss the audio recordings. Before the public comment period, he explained that board members could not respond and asked comments to refrain form naming faculty members or students.

“I’m standing to ask for justice for our children,” she said.

She said those in the recordings were supposed to be “the very people students should turn to with problems” and that “nepotism and favoritism” in the district had made administrators “feel as if they’re made of Teflon.”

She called for a full investigation into the matter and asked the district to overturn a ban on cell phones.

“The enforcement is just a knee-jerk response to being caught,” Ball said. “Let them keep their phones, please.”

The audience, which was vocal throughout the public comment period, cheered the request.

Amy Crawford said she was the mother of the student reprimanded in the recording and said another student who had recorded the exchange should be commended.

“We didn’t know until that child pulled out her phone and made us aware,” Crawford said. “To me, that child is a hero.”

She said the faculty members did not follow the proper code of conduct and cited Bentley’s boast of “I always win” when dealing with students.

“The only thing you won was the loss of respect you had as principal,” Crawford said.

Chris Smith (not the South Point council member of the same name) said, as a parent, “I get the discipline issue. I deal with it every day.”

But he said the faculty members had not responded properly or showed the proper resolve.

“I trusted you because you’re an adult,” he said.

Several in the crowd used the incident to bring up what they said were long-standing problems, such as bullying that were not being addressed by the district. Others said that a climate of racial harassment had existed among students and had not been dealt with. Many said these issues have existed at both the high school and middle school for years.

“It’s sad that it’s come to this point,” Isabella Johnson, a former student said. “I had no one to support me as a student and I felt pretty helpless.”

Austin Johnson, a 2019 graduate of South Point High School, echoed her remarks. He stated he had had similar issues with faculty at the high school.

All members of the public who spoke were critical of the faculty members.

One teacher asked to present a written statement to the board, to which many in the room demanded be read.

“I’ll read it,” Cindy Christian, the guidance counselor of the middle school, said.

Christian said she has worked in schools for nearly 30 years and “contrary to popular belief, have worked here longer than my husband, Mark Christian, the superintendent.”

“This statement isn’t from the union as a whole, but teachers who want their opinions heard,” she said. “Many aren’t attending tonight because of threats made on social media to them and their families and are afraid of more threats and public ridicule on social media.”

Many in the audience began loudly jeering at the claim.

“Most of our students come to school ready to learn and do their best,” Christian began reading, but said one student being disruptive “can interfere with the lessons, safety and entire learning of a classroom.”

She read that one of the roles of teachers was to make sure misbehavior “does not interfere with the rights of other students to learn.”

“Many never understand the difficulties of our jobs — the pressure from parents, community members and even pressure from state testing,” she read. “Teachers must be able to control their classrooms. We can’t have our hands tied from fear that we could become the subjects of discipline.”

Following the public comment period, the board then met in an executive session behind closed doors to hear Saunders’ findings.

Some in the audience had questioned why Mark Christian was seated with the board during the public comment period.

Board member Natalie Adams said it was part of his duties as superintendent, but explained that he did not have a vote in the matter and was recused.

While the board members were in the executive session, Christian remained in the room with the public for the entire period.

When board members returned, they said a decision had been reached, but they were unable to vote on the matter, due to one member, Stacey Thacker, being absent and a quorum not being possible, which is required for “certain decisions.”

The board then scheduled a special meeting for 6 p.m., Monday to vote on the matter.

Several in the audience asked if Bentley and the teacher would be returning to work the next day.

Parker said he was not able to comment and told them to “call the school in the morning.”

On Thursday, the board office confirmed to The Ironton Tribune that the teacher had returned to work, while Bentley was still on leave of absence.