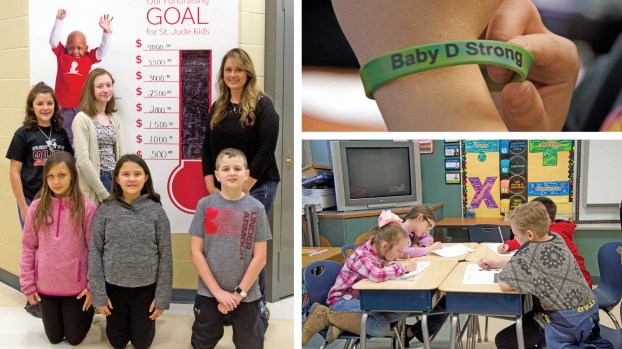 The top fundraising students at Dawson-Bryant Elementary for Math Day were, front, from left, Hailey Nance, Madigrace Kuehne, and Jayden Webb; back, Sophie Hapney and Regan Jiles. The students raised more than $100 each. Teacher Donna Wagner headed up the effort. Hapney was the lead, raising $252. The funds went to St. Jude Children’s Hospital. (The Ironton Tribune | Heath Harrison)

DEERING — Students at Dawson-Bryant Elementary school got a chance to show off their math skills on Friday and raise money for a good cause.

The school hosted its annual Math Day event, featuring a day of activities.

There were contests, such as guessing the number of marshmallows in a container, as well as math-related jokes and trivia on the intercom.

In the first few hours of day, all classes took part in a Math-a-thon, working on activities in workbooks distributed to students.

Monica Mahlmeister, the school’s assistant vice principal, said, every nine weeks, the school comes up with a public service project for students.

This period, they centered it around the Math Day events.

Teacher Donna Wagner has been leading a drive for St. Jude Children’s Hospital for the last nine years in the ninth grade.

This year, for the 10th anniversary, they opened the drive building-wide, surpassing their goal.

Mahlmeister said, each year, St. Jude provides the school with a breakdown of how their money was spent, which they share with students.

The leading fundraiser for the school was Sophie Hapney of the fifth grade, who brought in $250.

She said she collected the money from family and friends, and donated $100 from her own piggy bank.

“It feels good to do something for someone else,” Hapney said.

Wagner said Hapney explained her thinking behind the donation.

“She said she could have bought something that she played with and then just ended up putting down, or she could potentially save someone’s life,” Wagner said.

This year, there was an additional fundraiser that had a personal meaning to students.

The younger brother of a students at the school has been diagnosed with cancer, so the school sold “Baby D Strong” bracelets to raise funds for the family, to help pay for trips to Cincinnati for treatment.

“We sold out of them,” Mahlmeister said of the bracelets, which brought in $520.

As for the marshmallow contest, the winner of that was Leah Adkins, of the third grade.

Not only was she the closest in estimating the count in the container, she nailed it exactly with a guess of 1,025.

Mahlmeister said a few had guessed 1,000, but no one else came closer.

“And there’s no way she could have known,” she said. “I’m the one who counted them.”

SOUTH POINT — The South Point Board of Education met in a special three-hour session Wednesday night to address the... read more