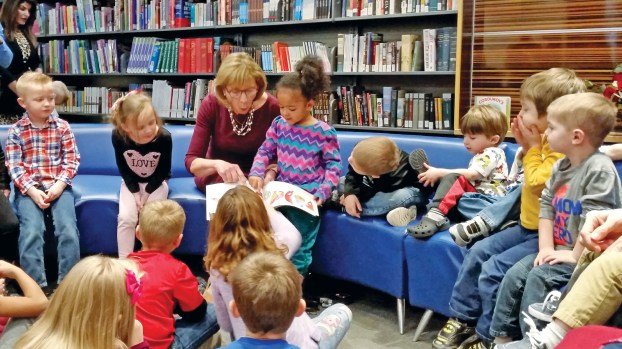 On Monday morning, Ohio First Lady Fran DeWine read to kids from Collins Career Technical Center’s early childhood academy. She was in Lawrence County to announce the kick off of the Ohio Governor’s Imagination Library, which gives children a book every month until they reach the age of five. (The Ironton Tribune | Mark Shaffer)

GETAWAY — On Monday morning, the First Lady of Ohio Fran DeWine stopped by Collins Career Technical Center to help kick off the launch of the Ohio Governor’s Imagination Library in Lawrence County.

After speaking to the adults to explain the program, DeWine went into the library to read “The Very Hungry Caterpillar,” by Eric Carle, to kids in CCTC’s early education classes.

As a mother of four and grandmother of 24, DeWine has a lot of experience reading to kids. The kids shouted out numbers as they counted all the food the caterpillar ate and oohed as the caterpillar built a cocoon and emerged as a butterfly.

She said it was important to read to children at an early age.

“We know children’s brains begin developing immediately and they are 80 percent developed by age three,” she said. “It is so important to use that time to read to children so they start learning and their brain keeps developing. It can make a huge difference in their life.”

The Imagination Library was created by county artist Dolly Parton in 1995, in honor of her father, who never learned to read, to make sure that every child in Sevier County, Tennessee, got an age-appropriate book,  from infant until age five when they enter school. The books are free and available to all children, regardless of family income.

In 2000, Parton said she would expand the program to any place that would support it locally. The program expanded across the U.S. and into Canada, England and Ireland.

Since then, the Imagination Library has sent over 132,397,655 free books to children, from infant to age 5.

The first book kids receive is the classic “The Little Engine That Could,” by Watty Piper and the last book they get is “Look Out Kindergarten, Here I Come!,” by Nancy Carlson, to get them ready for their first day of Kindergarten.

DeWine said they hope to have all 88 counties in the Ohio Governor’s Imagination Library program by the end of the year.

“We are working feverishly to get it in all 88,” she said. “We have it in about 55 of our counties and we’ve got it in, partway, in another 15. I would like to have most of it done by the first of April.”

She said there has been a good response in the counties so far and it was an incredible response in Lawrence County.

“To see all the elected officials and lots and lots of people got together and raise money for this,” DeWine said. “It is going to make a big difference.”

There are 3,800 children in Lawrence County that are eligible for the program.

She said research has shown that book ownership can be a predictor of future academic success and that studies have shown that children with at least 25 books in their homes are likely to complete an additional two years of education.

Ohio Governor’s Imagination Library provides a dollar for dollar funding match with each county that opens up the program to its residents. The Ohio General Assembly has committed $5 million to the library.

One of the local sponsors of the Imagination Library is Necco.

“Necco is thrilled to support the important work of the Ohio Governor’s Imagination Library, as the Lawrence County affiliate,” said Elizabeth Cremeans, Necco Family Counseling and Community Service program director. “We are elated to see each of Ohio’s children, birth to age five, afforded these books to spark their path to literacy for the very brightest future possible.”

“We really want to target the children at birth so they have five-year introductory period,” she said. “But they can start at any age and continue until they turn five.”

Holliday feels that Lawrence County is the exact type of place Parton was thinking of when she created the Imagination Library.

“Appalachia is very dear to her and similar to where she grew up,” she said. “I just could not be more proud. And it is very humbling to see the community to come together for something so important for the future of our children. And this is just one more piece to help them succeed.”

To sign up for the program, visit Ohio ImaginationLibrary.org.