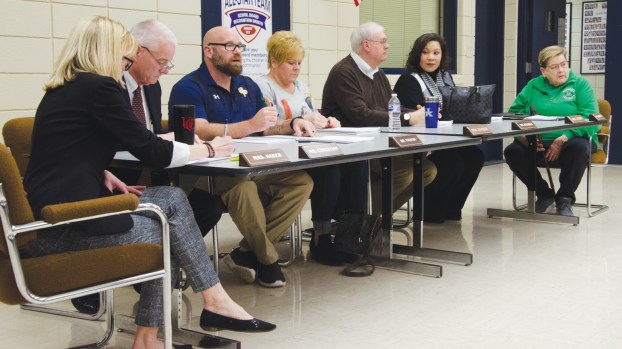 Josh Parker, president of the South Point Board of Education, addresses the audience at the start of a special personnel meeting on Monday. The board voted unanimously not to return principal Mylissa Bentley to the middle school while her case is pending due process. The board said it is their intention that she does not return to the school and that her contract ends at the school year’s end. (The Ironton Tribune | Heath Harrison)

BOE votes not to return principal to school: Says case involving teacher will be confidential

SOUTH POINT — The South Point Board of Education voted 5-0 on Monday not to return principal Mylissa Bentley to the middle school while they said due process is pending.

She had been on administrative leave for the past week, following an incident in which audio of her and a teacher angrily reprimanding a student was posted on social media.

The board called a special meeting on Monday night to vote on the matter. Another special meeting took place last week and a decision was reached, but the board was unable to vote, due to one member being unavailable.

The board said it is their intention that she not return to the middle school and that her contract ends at the school year’s end.

Bentley and another teacher were placed on leave while the incident was investigated by Lawrence County ESC Superintendent Jeff Saunders. His findings were discussed at last week’s meeting, which was heavily attended and public comment was taken.

Board president Josh Parker said, on matters of personnel, all are entitled to due process, and Bentley would be on leave while this is pending.

He said the teacher is the subject of a separate investigation and, due to contractual reasons, they can not speak about a confidential matter.

“I assure you, we are taking this seriously,” he said of the matter at the start of the meeting. “It seems five minutes of audio has torn our community apart.”

The board confirmed on Thursday that the teacher had returned to work.

Following the decision, several members of the crowd thanked the board.

“You did the right thing,” one woman told board member Natalie Adams. “You have my vote.”

The board met in executive session for about 45 minutes before announcing the decision.

The district’s superintendent, Mark Christian, who recused himself from the matter, did not take part in the meeting or get a vote. He remained with the crowd while the session took place.

Parker said that, with Bentley not at the school, duties would be handled by the school’s assistant principal.

In other business, the board voted unanimously to accept the resignation of a custodian at the high school.