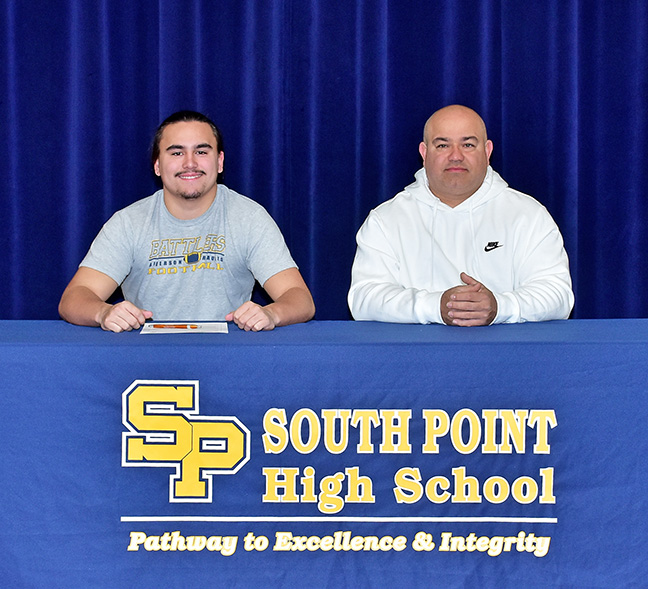 SOUTH POINT — Larry Fox is extending his football career and his South Point Pointers’ coach is extremely happy.
“Larry has come a long way in the last couple of years. When I got here a couple of years ago, I saw that he was definitely capable of playing at the college level so he really kicked in his junior year and he’s worked extremely hard,” said Gifford.
“He’s very athletic, he’s a big kid, and I really think he has the opportunity to go to college and do something special.”
The 6-foot-2, 220-pound Fox extended his career when he signed a letter-of-intent on Wednesday with the Alderson Broaddus Battlers.
“I was originally committed to Concord, but they got a whole new coaching staff. Urbana was a choice because Grant was going and it would have been easier to have a teammate there,” said Fox.
“But the money at some of those schools I couldn’t afford.
Alderson Broaddus is an NCAA Division II program and it is a member of the Great Midwest Athletic Conference which includes Cedarville, Findlay, Hillsdale, Kentucky Wesleyan, Lake Erie, Malone, Ohio Dominican, Ohio Valley, Tiffin, Ursuline, Trevecca Nazarene and Walsh.
A talented all-around player who started at both tight end and linebacker, Fox drew a lot of interest from the Alderson Broaddus coaching staff.
Fox had 30 receptions for 510 yards and scored six touchdowns this past season as he earned first team All-Ohio Valley Conference and special mention on the Southeast Ohio All-District team.
Fox said Battlers new head coach Travis Everhart talked mostly to him about playing tight end but could play some H-back as well.
“I think tight end is where he’s going to keep me, but he said I could play a little out of the backfield as a lead blocker,” said Fox.
“They haven’t said too much (about playing opportunity early), but he seemed very interested in the type of player I am, my size, what my capabilities are, and just what I could be and how I could help their program.”
While Fox had plenty of offensive highlights during his South Point career, there was one defensive moment this past season that stood out when he intercepted a pass and returned it 94 yards for a touchdown against Coal Grove.
Fox said he was well-conditioned, but admitted that the long sprint took its toll.
“When I got to the 50-yard line that’s when the brakes started kicking in,” said Fox with a laugh.
Fox plans to major in business.