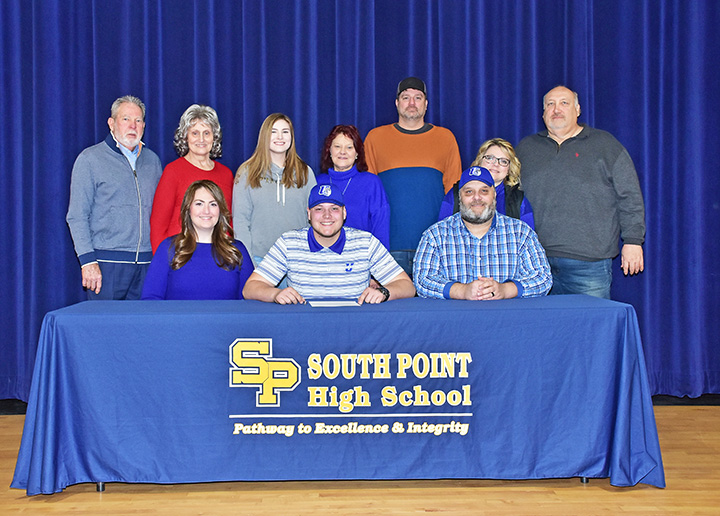 SOUTH POINT — There comes a time in life when a father and son have to have “the talk.”
Prior to his freshman season, Grant Gifford had that talk with his father James Gifford who also happened to be the South Point Pointers head football coach.
“Grant is proof that hard work pays off. Honestly, as a coach and as his dad I wondered if ability-wise he was going to be able to do it. Him and I sat down and had that conversation and since his freshman year I’ve never seen a kid work so hard, not just on the field but in the classroom,” said coach Gifford.
Grant Gifford said that there have been many talks since and expects more after signing with the NCAA Division II Urbana University Blue Knights.
“It was definitely different than junior high having someone else as a coach. It’s a good thing and a bad thing. You get the people saying, ‘It’s your dad. You get special treatment because it’s your dad,’ and that sucks, but also at times having to go home and hear a lot. He tries his best to not bring football to the house,” said Grant.
“There are benefits like knowing when things are going to happen and never having to worry about sleeping in for practice. Other than a few pros and cons, it was pretty normal to me.”
Gifford considered Alderson Broaddus because teammate Larry Fox signed with A-B and his brother attends school there.
“I really liked Mount Union, but being a D3 it’s the money. Urbana gave me a full ride and I love the coaches up there, I love the atmosphere up there and the players, so that’s where I decided to go,” said Gifford.
Gifford started for two seasons at Sciotoville East and then followed his father to South Point and he started the past two seasons.
The 6-foot-2, 265-pound Gifford was a first team Southeast Ohio All-District first team selections and honorable mention All-Ohio in Division 5. He was also named to the All-Ohio Valley Conference first team.
The Blue Knights were 7-4 last season as members of the Mountain East Conference that includes Notre Dame College of Ohio, Virginia College at Wise, Frostburg Sate (MD and North Carolina at Pembroke, and West Virginia schools Wheeling University, West Virginia State, West Virginia Wesleyan, West Liberty, Concord, Charleston, Fairmont State, and Davis & Elkins College.”
“I think (offensive coordinator) coach (Jim) Cordle wants me to snap the ball, so they’ll put me at center and maybe get some reps at guard,” said Gifford.
“They lost all their linemen, so we’re going to be pretty young up front. I’m going in with a mindset of wanting to start. Being a red-shirt isn’t a bad thing, but I want to be able to play my first year whether as a starter or just get some snaps.
“I think we have three other linemen. As of right now, it’s pretty shallow up front.”
“He’s going to go to college with the same mentality and he’s going to college and fight for a job. As far as work ethic, Grant’s right there with Blaine. Tyler had a lot more ability but he did work hard, too. Grant learned a lot from Blaine. They played side-by-side as a guard and tackle for a year. Blaine kind of took him under his wing and they played the season and won a playoff game, so he learned a lot from him.”
James Gifford coached linemen Tyler Gerald and Blaine Scott at Sciotoville East. Jarrell signed with Ohio State and Scott signed with West Virginia.
“If Grant was the same size as Blaine, we’d be talking about him going to a school like WVU. But he’s 6-1, maybe 6-2 so he’s going to go to school and be a great D2 player,” said coach Gifford.
Grant said the family recently discovered they were related to Marilyn Monroe as well as NFL Hall of Fame running back and kicker Frank Gifford.
Grant plans to major in law enforcement.