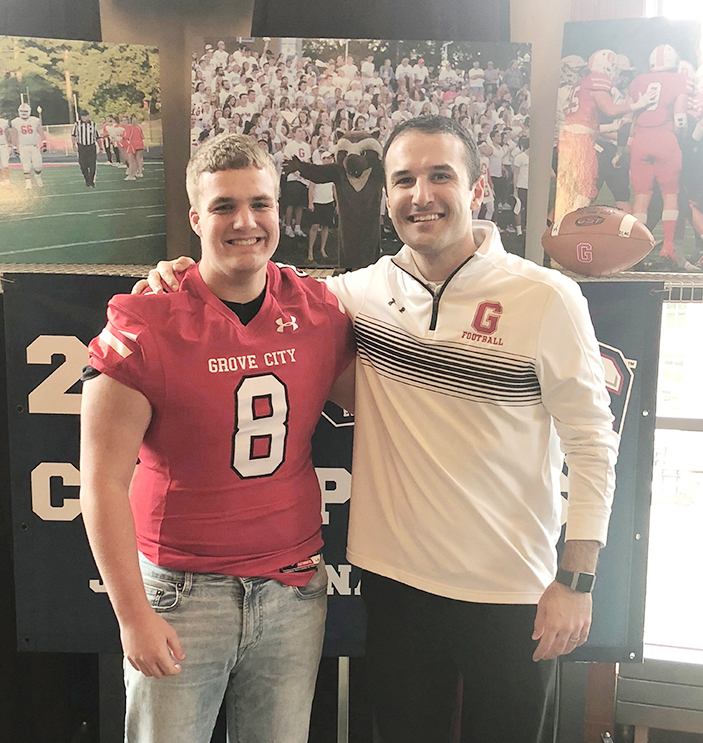 He might just be a teenager but Beau Brownstead sounds like he’s years ahead of his age.
The Ironton Fighting Tigers’ senior fullback had a very mature attitude about his signing with Grove City College in Grove City, PA.
“My number one goal is to keep my grades up. I know it’s going to be tough. But if I make the travel team, I’ll be happy with that,” said 6-foot, 220-pound Brownstead.
“I know a lot of guys who go away and as freshmen they are expecting to start but the way I look at it my freshman year of high school I wasn’t expecting to get any playing time so I’m going into Grove City with that same kind of attitude. I’m just going to compete and work as hard as I can and if I get to play, I get to play. I’m not really expecting anything.”
Brownstead had a plethora of offers with more than 20 NCAA D2, D3 and NAIA schools in the hunt. He also had a preferred walk-on offer from Division FCS Furman University where his father Heath played.
The D2 offers came from Tiffin, Urbana, West Virginia State, D3 offers came from Wittenberg, Denison, Marietta, Capital, Washington & Jefferson, Hope College, DePauw and Ohio Wesleyan. The NAIA schools included Concordia Ann Arbor (Michigan), Thomas More and Indiana Wesleyan.
“It’s a great school and aside from the great facilities, the thing that set it apart was the culture. Coach (Andrew) DiDonato, Coach (Dan) Vogt, they’re great guys and I think they’ll be really fun to play for. They’ve got a great program,” said Brownstead.
“They’ve got ways to help me not just in football but in my academics.”
Brownstead played fullback and tight end at Ironton but he said DiDonato plans to use him at the H-Back position.
“It’s like fullback. It’s a lot like I did my junior year at Raceland. It’s a blocking back,” said Brownstead.
“Some places were looking at me at linebacker. Some were looking at fullback. I didn’t have a preference. I was just going to play wherever I was told wherever I went. There’s a chance I could still play linebacker for Grove City.”
DiDonato implemented a plan to build the Wolverine football program “Brick-By-Brick” when taking over in 2016.
“From 2014 to 2015, Grove City didn’t win a game. Then Coach DiDonato started 0-13 his first 13 games, but then he turned it around and went 4-6 and then two seasons ago they went 8-3 and last season they went 9-2. Now, the goal is to win conference championships. It’s crazy how the rebuild process has gone so quickly,” said Brownstead.
Grove City plays in the Presidents Athletic Conference and tied for second this past season with a 9-2 record.
The conference consists of Bethany (WV) College, Chatham University (Pittsburgh), Geneva College (Beaver Falls, PA), Saint Vincent College (Latrobe, PA), Thiel Colls (Greenville, PA), Washington & Jefferson (Washington, PA), Waynesburg (PA) University and Westminster College (New Wilmington, PA).
Franciscan University (Steubenville, OH) will join the conference this fall.
The son of Heath and Lori Brownstead, Beau plans to major in entrepreneurship.

South Point Pointers’ Nakyan Turner (left) attempts to get off a shot in the lane as Coal Grove Hornets’ Jarren... read more