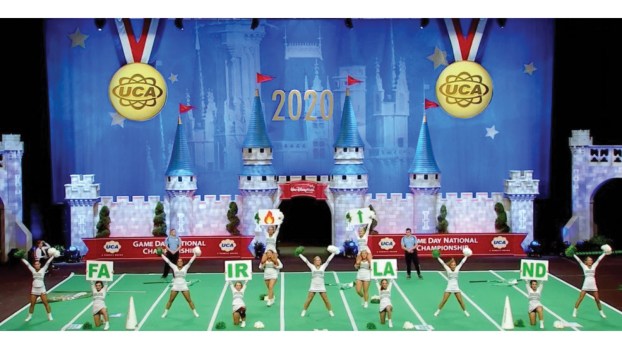 Fairland High School’s cheerleaders advanced to finals on Friday in the 2020 UCA National High School Cheerleading Championship in Orlando, Florida. The team placed fourth in their first visit to a national competition in 20 years. (Submitted photo)

The team of 13, comprised of one senior, five juniors, four sophomores and three freshmen, was captained by senior Holli Leep and competed in the Medium Varsity Division II Game Day at ESPN Wide World of Sports on Friday. It was the school’s first visit to a national competition in 20 years.

She said prelims start with 30 teams, divided into two groups of 15, she said. The top score from each group then moves straight to finals, leaving 14 in each group. Half of each group moves onto semi-finals (a total of 14). From those 14, seven move onto the final round, along with the two teams that went straight to finals. This makes a total of nine teams in finals out of the original 30. Each round, scores are wiped clean and teams start again.

“Our preliminary performance was excellent, but not our best, as we were beyond nervous!” coach Leep said. “But we made it to the semi-finals round, placing eight out of 30 in prelims. Our second performance was intense.”

She said after they found out they made it to the next round, they had to run back to the arena and perform first.

“That energy helped, as our semi-finals performance was much better!” she said.

“We got rid of those ‘never been to Nationals’ nerves and really stood out, placing sixth out of 14 in that round.”

She said they anxiously awaited the news that we made it to the next round – the finals, and performed for the third time on the same day.

“We had zero deductions on all three routines!  (This means no safety, rule or time violations, as well as no dropped tumbling or stunts,) Leep said. “Altogether, we threw 30 standing tucks and put up 18 liberties, without so much as a bobble! We ended up fourth in the nation!”

Leep said it was an “unreal experience.”

“So, for our tiny school, we really represented well,” Leep said. “It was an amazing experience. Teams go for years without making it to finals, and our team did it on our first trip.”

SOUTH POINT — A Flatwoods, Kentucky woman has joined Ohio’s “Saved by the Belt” club. At a ceremony at the... read more