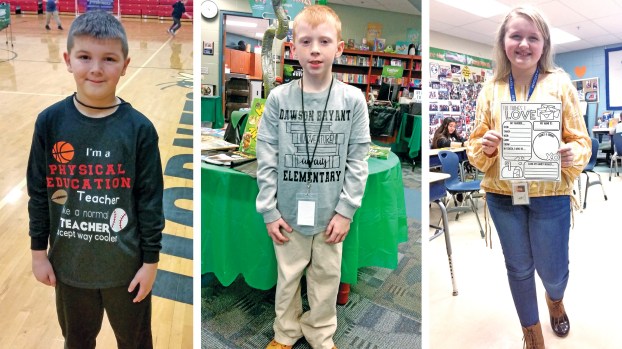 Taking over: Dawson-Bryant students get to be teachers, principals

On Wednesday morning, it wasn’t the voice of Principal Angie LaFon coming over the loudspeakers for morning announcements.

Instead, it was the voices of brothers, Jack and Joe Cremeans. For just one day, they were in charge of the school.

And they wanted to be principal for one simple reason.

And did they let that power go to their heads?

“I gave all the kids five extra minutes of recess,” sixth-grader Joe Cremeans said. So, was he trying to bribe his fellow students on his first day of power? “Yes!”

“I’m going to give everyone a chance to leave five minutes early,” the third grader said.

The Cremeans used part of their day to read “The Principal from the Black Lagoon,” by Mike Thaler. Mrs. Jacy Jone’s kindergartners listened raptly as they heard how the principal’s office supposedly was inhabited by crocodiles and there was a 12-foot paddle to be used on bad kids and other terrifying things. It turned out the child in the book was just exaggerating the rumors he had heard.

LaFon assured the students her office was nothing like that.

In Mrs. Rhonda Hall’s fifth grade reading class, fifth-grader Mylie Moore and her brother, Derek, were in charge of the lessons. This wasn’t Mylie Moore’s first time in charge, she has also been the principal, a music teacher and the librarian.

After all that experience, was there a school job she might like to do in the future?

“Possibly,” she said. “I would like to be either a teacher or a veterinarian.”

Derek Moore, a first grader, wanted to be a teacher “because they are good teachers” and he got to boss around older kids.

And what was his favorite part of the day so far?

Jenna Anson took over the art class and showed them how to make a puppy head made of Valentine’s Day hearts.

“I do art a lot with my sister and she makes me want to do it more,” she said of her reason of being an art teacher for the day. “I enjoyed teaching them how to make a puppy.”

In the gymnasium, Owen Aldridge was busy taking care of a situation where one student had taken another’s basketball. He was enjoying the job and even had a specially-made T shirt that read “I’m a physical education teacher, like a normal teacher except way cooler.”

“I really like athletics, anything athletic,” he said. Two years ago, he was the gym teacher and last year he was the librarian. “It’s fun to be in charge.”

“I always thought she had an interesting job,” she said. “And I love music, so I thought it would be fun to try for a day.”

While she doesn’t play an instrument, she does like singing. And did she enjoy bossing people around as they learned how to make rhythms?

In the library, first-grader Lukas Roberts was the librarian on the best of days — book fair day.

He admitted to looking over stuff when he wasn’t busy. He said it had been fun.

LaFon explained the student takeover was an annual part of the school’s fall festival, which is sponsored by the Parent-Teacher Organization.

“We have an auction and part of that auction is teacher for a day and principal for a day,” she said. Parents bid on it and then the winner’s kid gets to be in charge of a class like gym, art, reading, music, the library or even LaFon’s position. “The kids absolutely love it. The teachers all do something special for them. In my office, they have a desk plate with their name on it. And we feed them a special lunch. They have different job duties. They just have a great day.”

And certain positions raise more money than others.

Ms. Hall’s fifth grade reading class went for $700. The money is used for things for the students like paying for field trips and other things.

On Tuesday, the Lawrence County Sheriff’s Office got new equipment that will help track down “at risk” people if they... read more