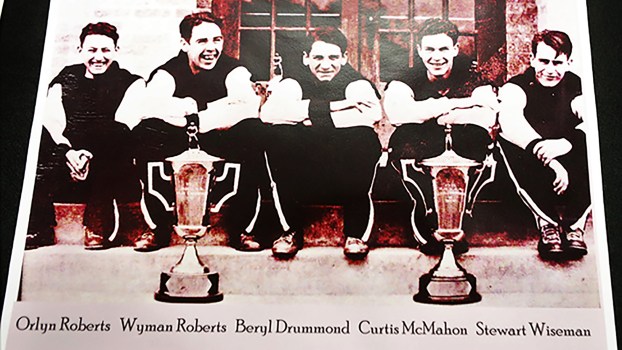 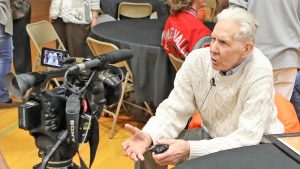 With former Ohio University and Ironton High School history teacher Bob Leith as the guest speaker, the amazing success and stories surrounding the Waterloo High School Wonders’ basketball team were revisited Thursday at Symmes Valley High School in a celebration of the 85th anniversary of the famous basketball team.

Symmes Valley superintendent Darrell Humphreys said the idea of a celebration and a commemorative game with throwback uniforms evolved from a conversation he had during football season with Dr. Joe Leith who though it was important that today’s students know the history behind the Wonders.

“We were just talking about the Wonders and that conversation led to it would be pretty cool to have some throwback uniforms and have a night to honor the legacy of the Waterloo Wonders,” said Humphreys.

The idea continued to gnaw at Humphreys and he collaborated with principal Greg Bowman and athletic director Rusty Webb to organize the celebration complete with uniforms.

Leith lobbied for schools and colleges to offer a class to teach students about the history of their community as well as Lawrence County. He said it would help evoke pride among the people.

“I remember when they played for the state championship in the Fairgrounds Coliseum in Columbus. It was supposed to seat 7,500. There were 8,400 there to see the Wonders. But they turned some people away. 500 of them. They had fire laws,” said Leith.

“They tore the doors down off the building. The police and officials were helpless. They couldn’t stop them. They stood in the aisles and watched the game. Nearly 9,000 people.”

Ohio originally had just two classifications, Class A for larger schools and Class B for schools with enrollments of 126 or fewer boys. Waterloo had an enrollment of 26 boys.

The four high schools were Cadmus, Aid-Mason, Windsor and Waterloo. But it was the exploits of the Waterloo boys’ basketball team that brought historic fame to the area.

Coached by Magellan Hairston, the Waterloo Wonders won back-to-back Class B state basketball championships in 1934 and 1935. Leith noted that Hairston was a head coach at three different schools and in 11 seasons he never lost a home game.

Waterloo did not have a gymnasium until 1926. The team played in the community halls of the nearby churches or other schools.

“There were three things they did that maybe no other team did in Ohio high school scholastic sports,” said Leith. “Of course, number one was their passing.

Their passing was phenomenal. And there was a reason for that. Some of the passes they made the (Harlem) Globetrotters would do later. And then their shooting and showmanship.”

The Wonders’ antics during a game were legendary and Leith said it was hard to determine fact from fiction. However, Leith recalled one time in a game at New Boston when an illegal play was actually allowed to stand.

“One of the Wonders got the ball, dribble out into the hall, talked to the ticket taker, came back in and shot a hook shot from out-of-bounds in front of the spectators. The referees were so stunned, they didn’t call a violation. They let it count as two points,” said Leith.

Constant February rains, and a bit of snowfall, have led to the Ohio River rising over its banks and filling... read more