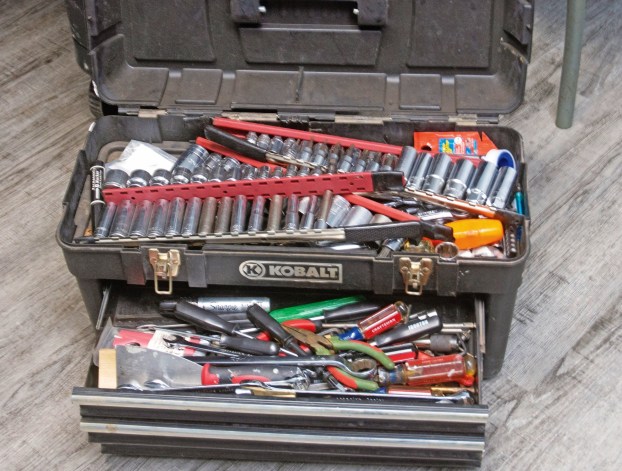 Two men were arrested early Tuesday morning after an Ironton Police officer saw them walking down an alley dragging a trash can full of car parts, tools and a microwave taken from a garage. The stolen items were at the IPD office on Tuesday. (The Ironton Tribune | Mark Shaffer)

2 men arrested for stealing from garage

Two men were arrested early Tuesday morning after an Ironton Police patrolman spotted them walking down an alley hauling a trash can full of auto parts.

Around 4:30 a.m., IPD officer Evan McKnight was on routine patrol when he saw the two men.

“He caught a glimpse of them in the alley carrying items,” said Detective Capt. Joe Ross. “He backs up and confronts them. He noticed they had numerous items, a trash can full of stuff he thought was stolen.”

Ross added the two men tried to ditch some drugs and some drug paraphernalia when McKnight pulled up. The officer started looking around the neighborhood and found out they had taken the items from a garage in the 2500 block of South Ninth Street.

Among the items taken were a microwave, a set of exhaust pipes, a muffler, a tool box full of tools, a book and even a framed photo of a modified show truck. It was all packed into a rolling 30-gallon trash can.

The two men were taken to the police station and interviewed. Ross said they admitted to breaking into the garage and taking the items. The police also recovered drugs that field tests indicated were heroin and crystal methamphetamine.

Ross said McClaskey and Bowman hadn’t confessed to any other break ins.

Ross said that the police department has heard numerous complaints of about people going through alleys at night and have taken steps to stop people from committing crimes.

“We’ve been trying to step up our patrols late at night, into the alleys,” Ross said. “This is just a result of us being out, being proactive and trying to catch these people out on the bikes with the back packs in the alleys, so these people will stop tearing through people’s trash. It’s working, with the help of the public.”

Anyone with information about this case or any other cases can call the Ironton Detective Bureau at 740-532-5606.