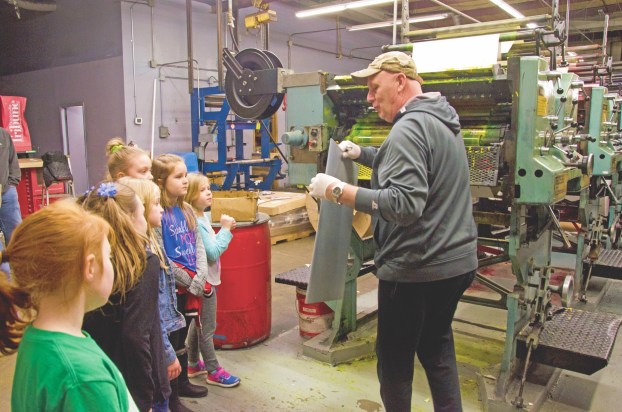 The Ironton Tribune production manager Bo Elliott shows members of Girl Scout Troop 2427 of Ironton a printing plate for the crossword page of the newspaper during the group’s tour of the building on Thursday.

Members of Ironton Girl Scouts Troop 2427 hosted their meeting for the week at The Ironton Tribune on Thursday.

After kicking things off by reciting the pledge of allegiance and the Girl Scout oath, the group began with reporter Mark Shaffer, who showed them a bound volume of newspapers from 1954.

He explained how the process of making the paper had changed since then, with metal typesetting being replaced by computers for layout and designing printing plates.

He also showed them how a page is laid out on the computer, allowing for placement of photos.

From there, the group met production manager Bo Elliott, who showed them how one of those printing plates is created, then he led them to the back of the building, where it was loaded into the printing press and they watched the paper feed through the machine.

Elliott showed them the rolls of paper used in printing the paper, which weigh several hundred pounds.

After his presentation wrapped up, he gave each of the girls a copy of the next day’s comics.

“You have those before anyone else,” he said.

The scouts then enjoyed refreshments before wrapping up their meeting.

Their next event is at the Ashland Town Center on Saturday, Feb. 29, where they will be selling Girl Scout Cookies from 4-6 p.m.

The Ironton Tribune regularly hosts groups for a tour of the building, with one area school set to come next month. Tours are typically offered on Mondays. If you have an interest in booking one, contact the paper at 740-532-1441.

About 25 donors were scheduled to donate on Thursday for a blood drive in the Mains Rotunda at Ohio University... read more