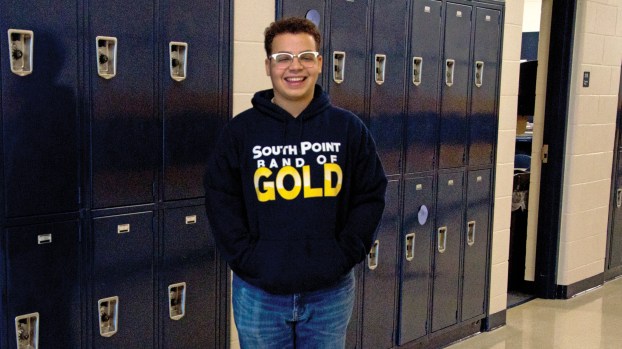 E.J. Daniels, a senior at South Point High School, who scored a perfect 36 on the ACT, has been named a National Merit Finalist. (The Ironton Tribune | Heath Harrison)

E.J. Daniels has been named a National Merit Scholarship finalist after scoring a perfect 36 overall on his ACT.

“He’s quite the remarkable young man,” principal Dean Nance said of Daniels, 17, a student in the district since beginning at South Point Elementary School.

The foundation says its mission is “to recognize and honor the academically talented students of the United States,” with goals including to “promote a wider and deeper respect for learning in general and for exceptionally talented individuals in particular” and “shine a spotlight on brilliant students and encourage the pursuit of academic excellence at all levels of education.”

As Nance points out, Daniels being named a finalist would guarantee him a full scholarship to a number of colleges.

“If he was going to any of those, it would be free of charge,” Nance said.

But Daniels has a chance for something bigger. He has his sights set on Stanford or Harvard, who recently sent a representative to South Point, Dr. Scott Moody, to interview him.

Nance said, in order to become a semifinalist, they take the top 1.25 percent of students on the PSAT. Then, of those semifinalists, finalists are selected after applications are reviewed and students submit writing samples, a biography and other materials.

From there, results will be announced between mid-March and May.

“It’s an honor just to be a semifinalist,” Nance said. “It’s quite prestigious.”

He and guidance counselor Megan Lemon said Daniels is the only finalist in the county and the only student they have known to make it to that stage in their years in education.

“He’s an outstanding student and a fantastic musician,” Nance said of Daniels. “He can play any horn in the band.”

In addition to band, Daniels is a member of Mu Alpha Theta, a math honors group; Ro Kappa, a history honors group; in the drama club and is a member of the school’s Quiz Bowl team, where he played varsity as a freshman when they won the county’s Ironmaster tournament a few years ago.

Daniels is also well-versed in Spanish and French, having taken several years of each.

“He’s fluent in both and is trilingual,” Lemon said.

Daniels, the son of Ryan Daniels and Nikki Lewis, says his plan beyond high school is to study physics, something he first became interested after taking chemistry early in high school.

“It was learning about the elements and how they come together and how they interact with each other,” Daniels said.

He said he wants to go into research and work somewhere like an observatory or at a particle accelerator.

“That would be super cool,” he said. “I want to discover something and shake things up — to find something that completely changes how we think everything operates and opens paths of discovery and thought.”

WNF will have three planned fires: Depending on the weather, could start next week

PEDRO — Starting Monday and through the end of May, Wayne National Forest is planning to have prescribed fires in... read more