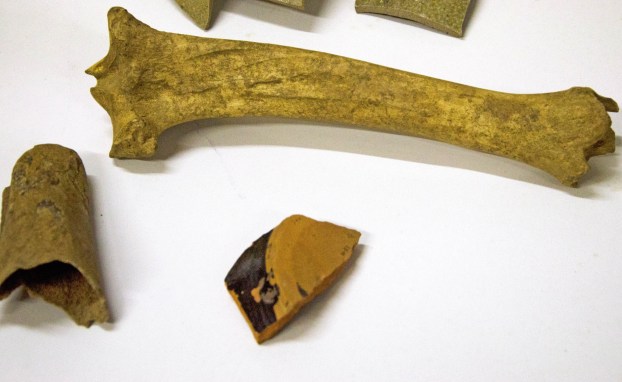 The Lawrence County Museum has bones and pottery fragments in its collection, which came from the Kelley homestead site in Hamilton Township at a later excavation in 1989. (The Ironton Tribune | Heath Harrison)

Giants among us: Skeletal remains gave rise to regional legends

EDITOR’S NOTE: In the late 1800s, there were many claims of “giant” skeletons found in the region, with the story of the “Adena Giants” becoming well known throughout Appalachia.

While modern researchers dismiss such claims now as being due to such things as inaccurate field measurements, often, these “findings” made their way into newspaper reports of the day. Nicole Cox, of the Lawrence County Museum, looks at such accounts:

Lawrence County’s history is replete with evidence of Native American occupation, but an article from an 1892 Ironton Register newspaper indicates a rather unusual find.

The Register states that S.C. Winkler entered the newspaper office with a basket that contained a skull from one of the several skeletons he had accidentally dug up on his farm.

That particular skull was from a skeleton that measured nearly nine feet long and was possibly a member of the “Adena Giants,” commonly known as the Mound Builders.

Mr. Winkler and his friend from the paper immediately mounted his two-horse express and headed toward the farm, which had originally belonged to Luke Kelly – one of the first settlers of Lawrence County.

The spot where the skeletons had been found was where Luke’s son, Joshua Kelly’s, residence had been constructed in 1828.

The men began shoveling and uncovered several more human bones, along with pottery and a five-foot-long strand of beads.

In nearby Portsmouth, a skeleton measuring 7 feet, 4 inches tall was uncovered in 1895. The Adena Mound in Chillicothe was excavated in 1901 and many similar skeletons and artifacts were uncovered at that time.

The newspaper continued, “Some of the bones were very large, showing that there were giants in those days, probably the Mound Builders. Among the remains were the thin cranial bones of a child, that almost fell to pieces at the touch. It would have been almost impossible to rescue a complete skeleton unless a person were to do the exhuming entirely with his fingers, and then he would find many of the bones quite imperfect. There seemed to have been no order of burial except that the bodies were laid with the heads in the direction of up the river.”

The Luke Kelly homestead was explored during an archaeological dig in the 1980s when it was owned by the Belville Mining Company. The dig uncovered bones, buttons, pottery, coins and other “prehistoric field specimens.”

The Lawrence County Museum is now in possession of these items, with some on display at Briggs Library. Pictures of the contents can be viewed at LawrenceCountyOhio.com.

Nicole Cox is a trustee at the Lawrence County Museum & Historical Society and owner of LawrenceCountyOhio.com. She can be reached at nsratliff@gmail.com.