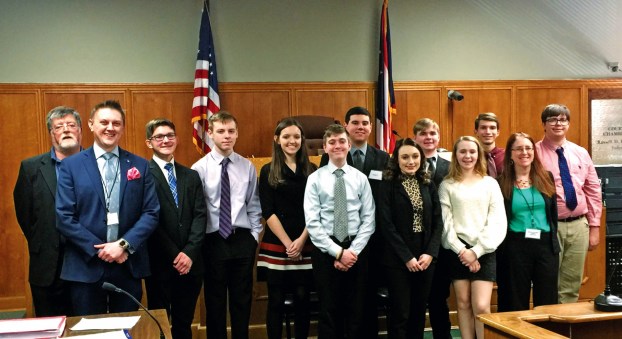 The one-day event was held on Feb. 7 in Portsmouth at the Scioto County Courthouse and the team won five awards and won three of four matches. The St. Joseph team was the only Lawrence County team and faced off against 10 other teams in the district competition in the morning and they were only one of four teams that advanced to the regional competition in the afternoon after winning both their district trials. The team came in third behind Portsmouth High School and Portsmouth West High School.

Their advisors were quite pleased since the team was competing against larger schools that had all seniors on their teams, while the St. Joseph team had one senior, one junior, five sophomores and three freshmen.

“So, 20 percent of our students were on the team,” he said. “If you look at the competitions we had, we beat three other teams and we lost to an all-senior team, they were very good. And so, considering how young our team is, it was quite an accomplishment.”

Joseph Merkel, who is an assistant prosecutor in Greenup County, said he was really impressed with the team.

“They put their all into this,” he said. “We started practicing once a week and as it got closer to the competition, we bumped it up to four days a week. They really delivered at the competition.”

The students got a package of information in October about their case, which was a First Amendment case of student Rory Maldenado, who was suspended from school by her principal, Blake Vargas.

Maldenado was holding a Second Amendment rally off school property. At lunch time, students got into a heated debate about it and two people were hurt during a food fight and the principal blamed her for the injuries.

The Mock Trial teams had to have a team member prosecuting the case and another was the defense lawyer. Other students played the role of witnesses in the case.

“The students got information on the 12 most relevant cases regarding the First Amendments and schools,” Joseph Merkel said. “We got that packet and then just grind on it for four months with the kids.”

Senior Kaitlyn Sheridan was the leader of the St. Joseph’s Mock Trial team. She was also on the team when she was a sophomore. She said she plans to major in pre-law and that is why she enjoyed Mock Trial so much.

She was prosecuting and her contention was that the disruption at the school was not the fault of Maldenado because the rally was held off of school property at a public park.

While the other side said there were disruptions at the school because of the rally. The student was not allowed to be at Senior Week events or walk with the rest of the class at graduation.

She said they all did a lot of work to prepare their cases.

“We’ve been practicing since October,” Sheridan said. “We all do multiple things, because we are a small school. I personally was playing basketball, working a job and doing Mock Trial, all at the same time. It was a lot of late nights. It was a lot of work, it wasn’t something you could just show up and do.”

He argued that the food fight at school caused material disruption of the student body and learning environment after a very heated discussion about the rally caused that food fight that left one student with an eye injury after being hit by a chicken wrap.

Maldenado was not at the school when the fight happened, but an associate of hers was present.

Samantha Anderson, a sophomore who is also a member of the boy scouts, won outstanding witness in both district and regional.

She got to play the role of the Principal Vargas.

“We worked really hard on this. I would go home and memorize the material, because I had nothing better to do,” she said, with a laugh.

She said the hardest part was having to look the judge in the eyes. “You can’t sound like you’re nervous,” she said. “You have to be confident. I like Mock Trial a lot. It was really fun.”

And while the students were learning about the legal precedents and refining their arguments, they still had to do their school work, after-school jobs and other academic or athletic teams.

“Every student on this team is involved in something else,” said advisor Maria Goldcamp-Hodges, an administrative law judge at the office of Disability Adjudication and Review in Huntington, West Virginia. Her son, Mark, was on the mock trial team. “We have three basketball players, five are on the bowling team and one cheerleader. They put a lot of work into this.”

As part of their effort to make it easier for the public to attend their meetings, the Lawrence County Commissioners... read more