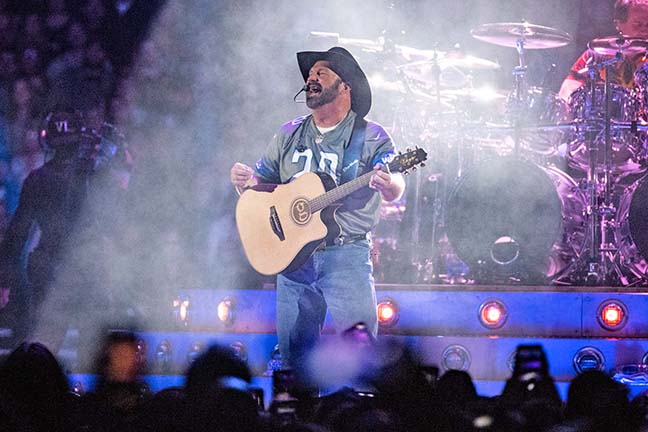 Garth Brooks performs at Ford Field in Detroit in front of a record concert crowd of 70,000 fans on Saturday, February 22, 2020.

DETROIT (AP) — Leave it to the internet to interpret Garth Brooks wearing a Barry Sanders jersey during a concert in Detroit as a political endorsement of a certain liberal presidential candidate.
The more than 70,000 fans who attended the country music star’s Feb. 22 show at Ford Field understood it for what it was: a tribute to one of greatest NFL running backs and Detroit Lions players ever.
Brooks told the audience that he donned Sanders’ No. 20 jersey to pay homage to him since they both went to Oklahoma State University.
“I was lucky to go to school with him,” Brooks said. “You guys got the greatest player in NFL history, in my opinion, in this jersey. I love this man.”
After the show, Brooks posted a photo on social media of himself wearing the jersey, which has “Sanders” and “20” emblazoned on the back. That’s where the trouble started.
Annoyed fans ripped Brooks in the comment sections under the photo, believing he was endorsing Vermont Sen. Bernie Sanders and the self-proclaimed democratic socialist’s 2020 presidential campaign.
“I had no idea you were a big freaking liberal socialist! I’ve listened to your songs for the last time!” one person wrote.
Another wrote, “If this is for Bernie Sanders, I’m done with you. I thought you were a true American that loves our country.”
Others, though, pointed out the apparent confusion over Brooks’ post or made fun of those who read too much into it.
“How much did KFC pay you to wear this?” a commenter wrote, referring to another famous Sanders: Colonel.
There’s no indication of who Brooks supports politically, though he performed at former Democratic President Barack Obama’s 2009 inauguration.
Bernie Sanders hadn’t weighed in on the matter as of Friday afternoon, but the Hall of Fame running back took it in stride, tweeting his fellow OSU alum, “Hey @garthbrooks, want to be my VP? #Number20For2020.”
Brooks responded in jest, “I would run any race with you! #Number20for2020 HA!!!”