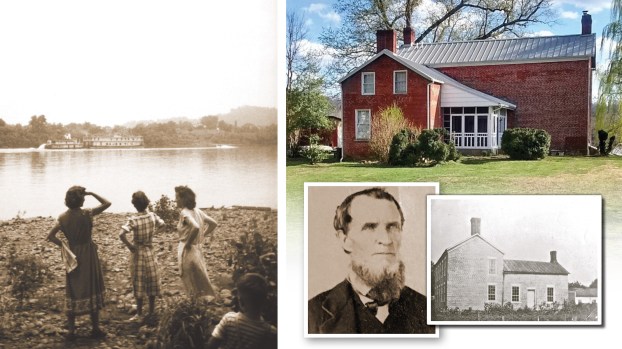 The house that Jacob Proctor built is owned by one of America’s most familiar voices.

Jim Thornton, who is the announcer for Wheel of Fortune, bought Windwillows in 1997.

Not only is he fan of local history, the house was once owned by his family.

“It’s such a precious thing and I never take it for granted,” Thornton said. “Even though Proctorville isn’t a big city with the house having tours all the time, I like holding onto it and bringing it back to its former glory. We’ve done a lot of work on it and always kept it true to when it was built.”

Proctor built the house in 1834 and he lived there until the 1860s. The house was a general store and a post office. Besides being a postmaster, Proctor also had a flat boat and would take goods down the Ohio River and even onto the Mississippi River to New Orleans.

“He has a ferry landing on the property and it was known as Proctor’s Landing,” Thornton said.

Proctorville, which had been known as Quaker Bottom, was re-named in Proctor’s honor in 1878.

Thornton was born in Huntington, West Virginia and graduated from Marshall University. He now lives in California, where he does the voice-over work for Wheel of Fortune and also works as the afternoon anchor on the news radio station KNX in Los Angeles. He has also done announcer work on MTV’s Celebrity Death Match and narration for the movie Monsters, Inc.

Thornton’s connection to the house is that his grandparents, Grayson and Adele Thornton, bought the house in 1947 and lived there until 1954. They planted many of the trees that are still on the grounds of Windwillows. The Shaw family owned it from 1954 until 1996.

“It was a great place,” Thornton recalls. “I grew up hearing about it and that it had a lot of great memories for my dad.”

Thornton himself was never in the house until he and his wife, Sue, bought the house in 1997.

“The Shaws kept it in great shape,” he said. “It was a family house and my wife and I love old houses. They’re a never-ending amount of work, but we want to get it cared for.”

The house is built in the Federal or Adam style and contains decorative elements that date back to Georgian architecture.

The bricks were made by hand, not at a factory. In fact, some bricks still contain imprints from the workers’ fingers. Thornton said despite its age, the house stays surprisingly warm in the winter because of the thick plaster used in the construction of Windwillows.

The house was set on fire in 2001 by “a young vandal,” as Thornton called him. The only upside was that the Thorntons could use insurance money to do things like put in wood lathe and plaster.

“Most of it was protected, thank God, from the fire by the dry wall,” he said. “So, we had the original riven lathe in place, it looks like zebra stripes.”

The lathe was cut by hand into thin strips to hold the plaster.

Although they had to replace some windows, they managed to find some that were original to the era of the house.

“We were fortunate enough to purchase some old windows from the then-owners of The Buffington Home in Proctorville, it looks just like ours,” Thornton said. “The amazing part is that they were made by the same people who made our old originals, so they’re better than duplicates.”

And as with any old house, there are rumors about it.

One is that there is a tunnel in the basement.

“The house was widely rumored to be have been a station on the Underground Railroad,” Thornton said.

One version of the story is that the tunnel ran down to the Ohio River.

Thornton said that since it was only a couple hundred yards from the house to the Ohio River, it wouldn’t make much sense to go to the effort of building a tunnel.

Another rumor has it the tunnel was connected to the nearby Wilgus House, which was torn down years ago and the Briggs Library branch was built on the property.

Thornton said they have looked closely and have found no evidence of a tunnel of any type. And if it was a stop on the Underground Railroad, he hasn’t found any documentation of it, although stations didn’t usually advertise their existence.

“I believe strongly that it was on the Underground Railroad,” Thornton said. “The Proctors were staunch abolitionists. I wish we had actual documentation of it, but we don’t. None of it exists but we have a lot of circumstantial evidence.”

While digging around in the basement, they did find something, a deep, deep well that was probably used as cold storage.

“My son and I have dug down 12 feet and we still haven’t gotten to the bottom,” Thornton said. “It may not be original to the house, but it is very, very old. It may date back to the 1860s, I just don’t know for sure.”

And as with every house, there is a ghost story.

“Everybody says the house is haunted,” Thornton said. “Everyone in the neighborhood has a story about it.”

Thornton said that when his son was young, he told him he had seen the ghost of Jacob Proctor.

“And I think to this day, he believes he did,” Thornton said. “But I haven’t seen or heard anything. I’m not superstitious, but I like to think there are some ghosts in there, but they are all benevolent.”

While he lives on the West Coast, Thornton comes back to the area frequently.

“My wife and I get there as often as we can. It’s a neat, neat place,” Thornton said. “And we have people carefully watching it when we aren’t here.”

Whether it is a bin of old photos in an antique store or looking at a portrait on a museum... read more