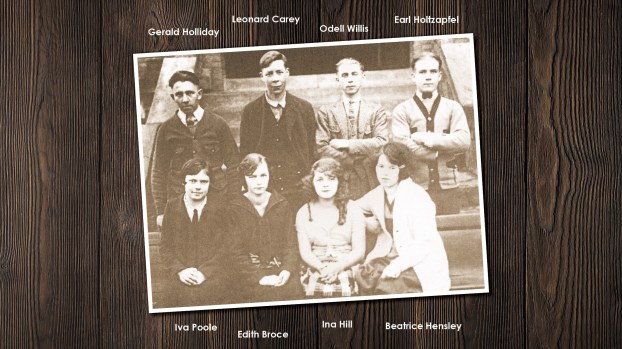 Whether it is a bin of old photos in an antique store or looking at a portrait on a museum wall, the question often enters the mind of who these faces from the past were and what became of them.

Below is a photograph of the 1924 sophomore graduating class at Monitor School in Coal Grove. When it was taken, nearly a century ago, all of the students were roughly 15 years old at the time and had their whole lives ahead of them.

With assistance from genealogist and family researcher Heather Harrison, we found who some of them grew up to be and what the future held in the following decades.

Remaining in Coal Grove and going on to work in the Dawson-Bryant school system was Iva Poole. She graduated from Ironton High School in 1926 and went to Rio Grande College. She worked as a special education teacher and retired from the board of education in 1972. She was married to Walter Myers and was a member of Disabled American Veterans Auxiliary and the Lawrence County Retired Teachers. She died in 1996 at age 87 and is buried at Woodland Cemetery.

Edith Broce married Clarence Murnahan two years later and the couple lived together in Kitts Hill for four decades. They had five sons, two daughters and 19 grandchildren and were members of Bald Knob United Brethren Church. She died in 1986 at age 79.

Ina Hill, who was also on the school’s girls basketball team, married Charlton Pierce, the school’s assistant football coach. He became a lawyer in Florida, where she worked as a schoolteacher. After 45 years living in Tallahassee, she died there in 1999 at age 90 and is buried at Woodland Cemetery in Ironton.

Delbert Odell Willis went on to Ashland Electrical School and worked as an electrician for Ashland Semet-Solvay until retiring in 1971. He lived in Ironton, taught Sunday school at Lorain Street Baptist Church and was married to Eva Hart. He died in 1973 at age 67.

Earl Holtzapfel married Marian Montague. Worked at a hardware store and at a funeral home in Lima. He was also employed as a tool grinder for Ford Motor Co., retiring in 1973, and was a member of the Elks. He died in 1997 at age 88.

No information was available for Beatrice Hensley or Leonard Carey.

PROFILE 2020 – Mission to Serve: Ironton Lions Club has been serving community for nearly a century