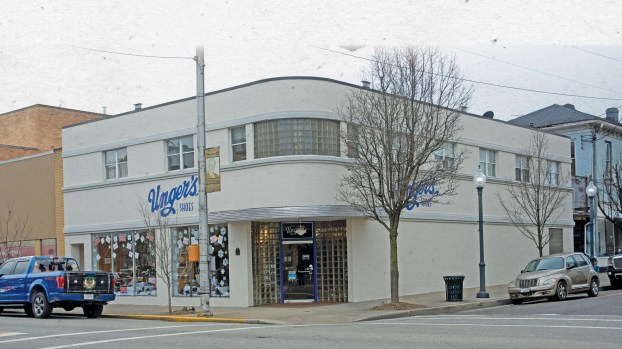 PROFILE 2020 – Seven Decades: Unger’s Shoes has been an Ironton fixture since 1937

For decades, Unger’s Shoes has been a fixture of downtown Ironton.

In 1937, Gene Unger got tired of working at the Shelby Shoe factory and decided to go into business for himself. He convinced Gabler’s Department Store in downtown Ironton to give him some retail space.

He kept at it until the Japanese bombed Pearl Harbor. In February 1942, he enlisted in the U.S. Army and was trained in the use of anti-aircraft artillery. He got out in 1945 and Gabler’s offered him his old space back. Instead, Unger decided to open up his own shop.

In February 1946, Gene Unger got a storefront at the corner of Third and Vernon streets, becoming the first tenant of the first building to be built in Ironton after World War II.

Seventy-four years later, his son, Joe, and grandson, Joseph, still run the store in the same place. Both got their starts when they were young, doing simple things like sweeping floors, emptying trash cans or running errands.

Joseph Unger recently rejoined the family business after working in Texas for a couple of years. He started working on the store payroll when he was in junior high and just 14 years old.

He remembers that he and the other kids would sit in the backroom and watch TV, eating food from Manzetti’s or CR Thomas, while their dad was working.

“We grew up here. This was our second home,” Unger said. “This is as much my baby as anyone else’s.”

He said that one of the reasons the business has been around for 84 years as a non-franchise, family business is that they have always stuck to their core value.

“Our core values are treating the customer right and providing them the best possible service,” he said. “If you have the customer service and the quality product, those two combined is what separates you from the competitor.”

He said his dad, Joe, always told him that when the business started, the competition was the other stores in downtown Ironton.

“Our competition today is the world. It is the internet. So, to find new ways to be successful as a small, independent shoe store can be challenging,” Unger said. “But if we stick to providing our customer with the best service possible, that when they leave, they say ‘Wow, we want to come back,’ and ‘My feet and my body feels better, I feel like a new person’ — that is what we strive for every single day and that is how we can compete.”

Joseph Unger went to college and got an engineering degree and     worked in the oil fields of Texas. But he felt drawn back to Ironton and the shoe store.

“But the last five years I was doing that, this place was always on my mind,” he said. “I always wanted to come back because the satisfaction I felt here is not like what I was doing in the oil fields.”

He said that job was to drill a hole and then move on to the next project.

“There was no satisfaction, I knew exactly what I was going to do every single day,” he said. “And yeah, there were challenges. But it wasn’t like it is here, where you are able to help other human beings and make people smile. That is why this store is worth every single hardship, because it is so satisfying to help your friends, your neighbors, your family.”

He and his wife moved back last August. They had a little girl and named her Bonnie, after Joseph’s grandmother.

“It made sense to come back,” he said. “We have our families here.”

He said he has noticed since he has come back that there is a new sense of pride in Ironton.

“It seems to be on the upswing. My dad has said that he has seen more things happening in Ironton in the last 10 years than he did in the previous 40. And that is exciting, to be a part of something that can continue to build the city’s revitalization. I am excited to see the growth and seeing new businesses come into downtown.”