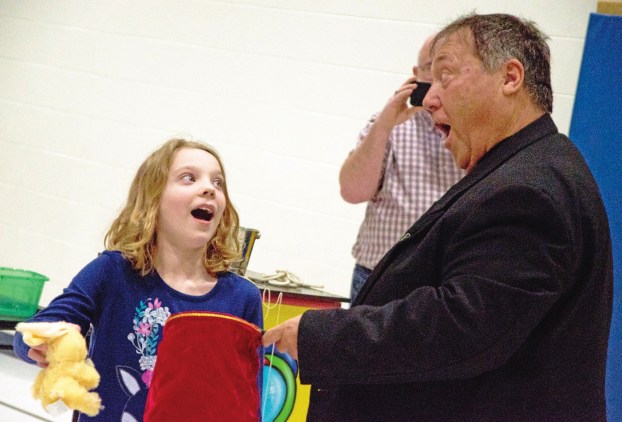 South Point Elementary School third grader Sophie Henger reacts in astonishment as magician Billy Hall performs a trick at a show at the school on Thursday. The students were being entertained as a reward for their fundraising for a penny drive with the El Hasa Shriners Hillbilly Clan 1 Outhouse 8, of Ironton, for the Shriners Childrens Hospitals. (The Ironton Tribune | Heath Harrison)

SOUTH POINT — On Thursday, students at South Point Elementary School were rewarded for their efforts toward a good cause.

Members of the El Hasa Shriners Hillbilly Clan 1 Outhouse 8, of Ironton, arrived at the school, where they met with all third grade classes.

“For bringing in the most money, you’re in for a real treat,” Roger Morgan, with the group, said.

The students had been taking part in a penny drive, along with Rock Hill students, and brought in the top total for the effort.

Kicking off at the school’s Halloween parade, where the hillbillies are a regular feature, the children brought in coins and bills, with all funds going to the Shriners Childrens Hospitals and the transportation fund to take families to the facilities, located in Cincinnati and Lexington, Kentucky.

As a reward for their fundraising, the Shriners brought in magician Billy Hall, who entertained the children for about a half hour with a variety of tricks, as he asked the crowd to chant the magic words “Purple Peanut Butter.”

Several volunteers were brought up from the audience, with many receiving stuffed animals for taking part.

Altogether, the students raised $562.38 from their work.

Leaping into a healthy future: Birthday has extra meaning for South Point child who is in remission from cancer

SOUTH POINT — After four years, Hannah Staton will have her “first” birthday today. She was born on Leap Day... read more